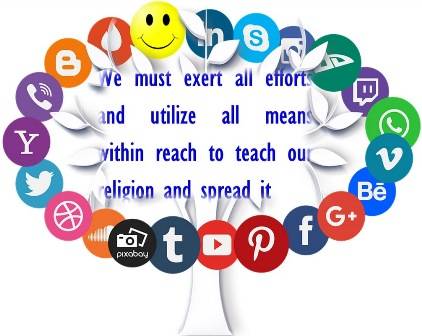 It is sad to note that when a researcher looks through some of the international libraries available on the Internet in order to find information and references regarding any type of data he requires, he finds what he is looking for indexed in a very accurate manner, but, at the same time, we as Muslims do not have a single library about Islam that would serve as an encyclopaedia on the Internet for researchers to find any data they require about Islam, save it to their personal computers, and print it out. Are we not the ones with the superior system of life? Are we not the ones referred to in the saying of Allah (which means): “You will be superior if you are [true] believers.” [Quran 3: 139] If we are the ones upon the truth and our religion is superior, then we must realistically establish this loftiness and superiority. If are unable to conquer the disbelievers by means of weaponry, then the least we can do is conquer them by spreading this religion via the Internet.

When one takes a look at some international radio stations, he finds the likes of Monte Carlo, which spreads Christianity day and night and is upon falsehood with claims such as Allah is one of three (i.e., the concept of trinity) and that Allah is ‘Eesa the son of Maryam, or that he is the son of Allah. They utilise titanic resources to broadcast such deceitful information to the world. On the other hand, we Muslims do not exert any effort to propagate our faith - even amongst the workers who live among us such as our drivers and maids. Indeed, this is a great shortcoming which Allah will hold us accountable for.

We must exert all efforts and utilise all means within reach to teach our religion and spread it, because Allah Says (what means): “You are the best nation produced [as an example] for mankind.” [Quran 3: 110]

Why are we the best nation? Allah tells us in another verse of the same chapter where He says (what means): “[Due to your] inviting to [all that is] good.” [Quran 3: 104]

? Anyone can convey what he knows about Islam; we are not suggesting that people without knowledge should shoulder the responsibility of propagating Islam, but one may know something and can convey that to others. What effort are we exerting to convey Islam?

The disbelievers are working day and night, as are the innovators who spread their ideology that Allah is the sum total of everything in the universe - and that therefore, even pigs contain Allah, Glorified and Praised is Allah above what they claim; these sects have many sites on the Internet translated into various languages. Some of their websites contain clear infidelity, and they have their homepages in many languages such as Arabic, English, Spanish, French, Chinese, Japanese …etc. while on the other hand, the Muslims, who are the followers of Islamic Monotheism, are still lagging behind in this regard. There are websites for all the different deviant sects, such as the Isma’eelis, Qadyanies (who claim that Ghulam Ahmad Mirza Qadyan was a Prophet after Muhammad

), Baha’ies and Satan worshippers. When one searches for the word 'Islam' with the major search engines on the Internet, the first website that is listed is that of Louis Farrakhan's Nation of Islam – the group that has destroyed the image of Islam. Moreover, the search will also list other websites that call to and encourage evils such as committing suicide.

. We must present it in place of the misguided rationalists who claim to be intellectuals and twist the texts of the Quran and Sunnah in order to fit their desires and please the disbelievers - some of them by rejecting the texts in the Sunnah. There are others amongst them who claim that the Jews and Christians are our brothers, and that it is permissible to exchange gifts with them during their religious holidays. They pass odd Fatawa in order to please the disbelievers; They make statements under pressure such as that it is permissible for women to take charge of ministries and the judiciary, thereby rejecting the statement of the Prophet

in the book of Imam Al-Bukhari

said: “Never will a group of people succeed if they make a woman in charge of their affairs.” These people spread their garbage via their websites and their Islamic rulings spread misguidance, just as they do on some of the satellite television channels.

we must propagate the real Islam in place of what is being done by these misguided people who spread their falsehood in the name of Islam, and who collect millions for their websites so as to enable themselves to publish and broadcast their garbage.

Jihad is of different types which Muslims must carry out. Establishing websites to propagate Islam and call the disbelievers towards Islam, which gives them the chance to ask questions and have them answered is an obligation that we must fulfil, It is also an obligation to call the Muslims to Islam when they stray away whilst living in disbelieving countries, dissolving into western communities and thereby regressing into becoming Muslims in name only - them and their children. These people need help and instruction, and experience has shown that the method of using Islamic Propagation via the internet is a highly successful one.

The use of the Internet to propagate Islam -I

The use of the Internet to propagate Islam - II