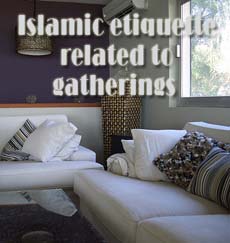 Verily, every get-together must include mentioning and thinking of Allah; do you hear a verse from the Quran, a Prophetic Hadeeth, a religious advice, discussion revolving around an Islamic ruling or an Islamic reminder in today’s gatherings except for those upon whom Allah has mercy?

said: “It is not permissible for a man to separate between two men when sitting, except after their permission.” Thus, one may not enter into a meeting and sit in the middle of two people who are next to each other unless he seeks their consent, or else, he should sit in any other spot he can find.

·  It is the Sunnah that one sits in the furthest place he can reach and find an open spot in, and he may not make someone leave his place or seat, so as to sit there. The Prophet

said: “It is not allowed for a man to get another man up from his spot to sit in his place.”

·  Sometimes one might be invited to a private get-together, in which the conversations may consist of secrets of the host; it is not permissible for him to reveal their secrets or those of their family, because the Prophet

said: “Secrets (or personal issues) discussed during gatherings must be kept concealed.”

is reported to have said: “The best assemblies are those which are spacious.” Hence, it is recommended to make the assembly area sizeable for the guests as a way of expressing generosity, if a person can afford to do so.

·  Making room for each other during gatherings is a desirable thing, especially when the place becomes full. Allah Says what means: “O you who have believed, when you are told, “Space yourselves” in assemblies, then make space; Allah will make space for you (i.e., in His mercy, in Paradise, or in everything good).” [Quran 58: 11] When one’s heart has place for his brother, then his gatherings will automatically become spacious and people will make room for one another; otherwise, if one does not harbor such feelings towards his brother, he will not make room for him, and even if he does make room, one will not be doing it willingly.

·  Saying the designated supplication before leaving an assembly. He

said: “Whoever sits in a gathering and indulges in useless talk, but before getting up, he supplicates: ‘Subhaanaka Allahumma wa bi hamdika, ash-hadu allaa ilaaha illaa Anta, astaghfiruka wa atoobu ilayka (O Allah! You are free from every imperfection; praise be to You. I testify that there is none worthy of worship except You; I ask Your Pardon and turn to You in repentance),’ he will be forgiven (for the sins he may have intentionally or unintentionally committed) in that assembly.”

What can people want more than this? Islam gives one the chance to make amends and grants him the opportunity to be forgiven for the sins which he may have committed, by uttering these few words. Truly, the forgiveness of Allah is great, as He Says what means: “…Allah is the possessor of great bounty.” [Quran: 62:4]

·   It is narrated that whenever the Prophet

met one of his Companions, may Allah be pleased with them, he would not leave the meeting until the other man would be the one who got up and left; and, when he

met a man who greeted him by taking his hand, he

would give him his hand and not take it away until the man himself let go of it.

was very polite and courteous. Whenever his guest would get up to leave, he

would get up with him to see him off and shake his hand. When, in a gathering, if a man wanted to whisper into his ear, he

would listen until he finished what he desired to say. Undoubtedly, he