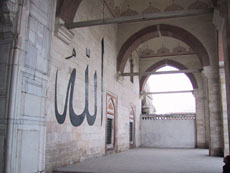 Again, knowing and recognising the favors, as well as their source, is the initial step and it precedes thanking Allah. Recognising favors such as the favors of being able to move, walk, work, exercise, sleep, eat etc. all branch from the great favor of being healthy. The favor of being humans; the favor of being Muslims; the favor of being guided; the favor of being well-mannered; the favor of being a Prophet (when it applies for those whom Allah Has chosen) are also great ones to reflect on. This issue is very important to mention when calling people towards Allah. Allah repeatedly reminds us in different parts of the Quran of His favors upon us. He says (what means): “…And [He] subjected for you the ships to sail for you through the sea by His command and subjected for you the rivers. And He subjected for you the sun and the moon, continuous [in orbit], and subjected for you the night and the day. And He gave you from all you asked of Him. And if you should count the favor [i.e., blessings] of Allah, you could not enumerate them. Indeed, mankind is [generally] most unjust and ungrateful.” [Quran 14: 32-34] There are many other verses in the Quran in which Allah reminds us of the favors that He has bestowed upon us. One way of calling people towards Allah is to remind them of the favors of Allah upon them, so that they may be grateful and not to be amongst those about whom Allah says (what means): “…And Allah is full of bounty to the people, but most of the people do not show gratitude.” [Quran 2: 243] Some people attribute favors to other than the actual source, like Qaaroon, who said when he was reminded of the favors of Allah upon him (which means): “…I was only given it because of the knowledge I have'…” [Quran 28: 78] It is arrogance that leads to such a reaction, which results in misery for such people, because Allah says (what means): “And whatever you have of Favor – it is from Allah…” [Quran 16: 53]

would perform Thikr, or supplications and remembrance of Allah, to see how much gratitude and praise they contained;
·        Whenever he

woke up, he would say: “All praise is due to Allah, Who has brought us back to life after He has caused us to die, and to Him is the return.”
·        Whenever he

would retire to bed, he would say: “All Praise is due to Allah who has fed us, provided us with drink, satisfied us and given us protection. Many are those who have no one to provide for them or give them shelter.”
·        Some of his regular morning and evening supplications were: “O Allah! Whatever favor I, or any of Your creation has, is solely from You; there is no partner with You; All praise and gratitude is due to You.”
·        He

would ask forgiveness saying: “I seek refuge in You from the evil of what I have done. I acknowledge the favors that You have bestowed upon me, and I confess my sins, so forgive me.”
·        All his supplications would begin with the praise of Allah, which He is very worthy of.
·        He

wished to eat, drink, travel or sneeze, he would praise Allah and thank him.
·        On one of the nights when it was the turn of ‘Aa’ishah, may Allah be pleased with her, to be with him, she began looking for him in the dark by feeling around with her hand, then her hand touched his hands and she heard him saying: “O Allah! I seek protection against Your Wrath in Your Pleasure. I seek protection in Your Pardon against Your punishment; I am not capable of enumerating praise of You. You are as You have lauded Yourself”.
Expressing gratitude by the limbs: Any righteous deed or act of obedience which the son of Aadam performs is a form of expressing his gratitude to Allah, the Lord. There are different means of performing gratitude of the limbs; one of which is when one practices the instruction of Prophet Muhammad

when he said: “When you get up in the morning, charity is due from every one of your joints. There is charity in every ascription of glory to Allah; there is charity in every declaration of His Greatness; there is charity in every utterance of praise of Him; there is charity in every declaration that He is the only true God (worthy of worship); there is charity in enjoining good; there is charity in forbidding evil. Two Rak’as of Dhuhaa (i.e., forenoon prayer) is equal to all this (in reward).” Thus, any of the things mentioned in the above narration is a righteous deed which reflects gratitude to Allah. One should exert all efforts to thank Allah using all his limbs and should never feel that he has thanked Allah enough, or that he does not need to do it again the next day.
There is no contradiction between thanking people and being grateful to Allah, because Allah commands us to thank and reward those who do us favors, the foremost of them being one's parents, as Allah says (what means): “…Be grateful to Me and to your parents…” [Quran 31: 14] The problem is when one thanks people and abandons thanking Allah; this is a great disaster. Additionally, there is a difference in the manner in which one thanks people and thanks Allah; one should be submissive and humble whilst thanking Allah because this reflects servitude, while on the other hand, one cannot do so with other humans; one should instead supplicate for their forgiveness and praise them. One who does not thank other people is evil and it is unlikely that he would thank Allah and express gratitude towards Him.
Additionally, favors and bounties from Allah are preserved and even increase by one being grateful, but what is it that helps a person to be grateful?
·        By observing the condition of those who are lower than you in status, and to remember when seeing those who are higher than you in standard that it is only by the decree of Allah. Allah says (what means): “And it is He who has made you successors upon the earth and has raised some of you above others in degrees [of rank] that He may try you through what He has given you.”[Quran 6: 165]
·        By realising that one will be held accountable for these favors, as Allah says (what means): “Then you will surely be asked that Day about [worldly] pleasure”. [Quran 102: 8] Even for bounties as seemingly minor as cold water. Some people, due to their misunderstanding of the concept of gratitude, deprive themselves from enjoying them, whereas in fact they were bestowed upon us to enjoy. Allah says (what means): “…Eat from the good [i.e., lawful] things which We have provided for you and be grateful to Allah if it is [indeed] Him that you worship.” [Quran 2:172] Thus, gratitude cannot entail deeming lawful matters as prohibited, which is one of the principles of the Soofees. If gratitude was a precondition of enjoying the bounties of Allah, then nobody would have been able to enjoy any of the favors or bounties from Allah, because no one can do enough deeds to appropriately express gratitude to Allah for what He bestowed upon us. The solution therefore is to utilise these favors and bounties in ways that please Allah, and to thank Him and seek His pardon for our shortcomings - and Allah will accept this much from us.
·        By supplicating to Allah to help us to be grateful to Him, as in the prophetic supplication in which he

taught Mu’aath, may Allah be pleased with him, to say: “O Allah! Help me remember You, express gratitude to You and worship You in the best manner.”
It is more virtuous to be grateful when blessed with a favor than to persevere when one is afflicted. Allah loves to see the effects of His favors. Once, Imraan ibn Husayn

came out wearing a fine garment, and when he saw how his friends were looking at him, he said: “The Prophet

said: “Allah loves to see the effect of His Bounties on His slaves.”
The Prophet

said: “Eat, drink and give out in charity without arrogance or exaggeration, because Allah loves to see the effect of His Bounties on His slave.” Therefore, the limit when expressing and showing the effect of the favors from Allah on oneself is to neither be boastful and proud, nor to exaggerate.
Allah hates a Kanood, or an ungrateful person, and punishes him. Imaam Al-Hasan

said: “A Kanood, is one who remembers the disasters which befall him and always forgets to mention the favors from Allah (upon him).” This quality is more apparent in women; for example, a woman's husband is kind to her for many years, but as soon as she experiences a minor shortcoming from him, she will immediately tell him that she has never seen anything good from him. This is a form of oppressing the husband, and thus the majority of the dwellers of Hell are women, the reason being that they are ungrateful to their husbands. If being ungrateful to one's husband results in punishment in Hell, how will the case be for those who are ungrateful to Allah?
’Umar ibn ‘Abdul-‘Azeez

would look at the favors of Allah upon him and say: “O Allah! I seek refuge in You from meeting Your favors with ungratefulness or denying them after knowing them, or forgetting them and not mentioning them with praise (i.e., praising You).”
It is also recommended that one prostrates whenever he receives news about a new favor or bounty from Allah, as was the practice of the Prophet

. Likewise, when Abu Bakr, may Allah be pleased with him, received the news that Musaylamah the liar (who claimed to be a Prophet after the death of Prophet Muhammad

) was killed, he went down into prostration. Ka’b ibn Maalik

also prostrated when he was given the good news of forgiveness from Allah after he failed to participate in a battle. On the other hand, this should not be a daily practice, but rather, it should only be done when one receives good news or a new favor. An example of a new favor or good news is the incident when one of the Salaf

who was hiding from Al-Hajjaaj, prostrated when he received the news of his death, because the death of a tyrant is a great bounty and favor from Allah. Also, the news of having a new baby, or a Muslim victory over the infidels, warrants such a prostration to be made.
Imaam Ibn Al-Qayyim

said: “The religion consists of two halves; one half is represented by gratitude and the other half is by perseverance.” Scholars have disputed regarding who is better, a rich person who is grateful, or a poor person who is patient, but it seems that it is best for the rich person to be grateful, and for the poor to persevere.
Gratitude - I