The Time of Iftaar (Breaking the Fast) 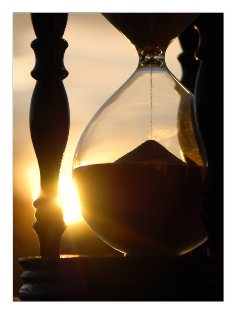 It was narrated on the authority of ‘Umar ibn Al-Khattaab

that he said that the Prophet

Another version reads: "…And the sun disappears, you should then break your fast." [At-Tirmithi]

Another narration reads: “When the night falls from this side, and the day goes away from this side and the sun disappears, then the fasting person should break his fast." [Abu Daawood]

“We were in the company of the Prophet

on a journey and he was fasting. When the sun set, he said: ‘O so-and-so, get up and mix Saweeq with water for us.’ He (that person) replied, ‘O Messenger of Allah, if only I could wait till it is evening.’ The Prophet

said: ‘Get down and mix Saweeq with water for us.’ He replied, ‘O Messenger of Allah, if you could only wait till it is evening.’ The Prophet

said again: ‘Get down and mix Saweeq with water for us.’ He replied, ‘It is still daytime!’ The Prophet

then drank it and then said: ‘If you see the night falling from this side, the fasting person should break his fast.’” [Al-Bukhari and Muslim]

In another version that was narrated by Imam Muslim

the following addition was mentioned: "And he pointed with his hand towards the East."

According to the narration of Ahmad

In a narration by Abu Daawood

it was mentioned that the Prophet

Saweeq is a type of food taken from powdered wheat/barley, to be mixed with water with a spoon or something similar.

First: Once the sun sets, the time of Iftaar becomes due. It is referred to by the falling of the night and the passing of the day. It is the disappearance of the disc of the sun, even if there is still light in the horizon or anywhere else.

Second: The eagerness of the Prophet

to clarify and explain with the most eloquent speech all things related to the rulings of the Sharee‘ah. Here, he mentioned three things which make it lawful to break fasting: the falling of the night, the vanishing of the day and the setting of the sun. Despite the fact that if any one of these occurs, all will occur as well, the Prophet

combined them all in his speech because, and Allah knows best, a person may fail to see with his own eyes the setting of the sun, i.e. the sun disc, due to a certain impediment, but still see the darkness of night in the East, and thereby it becomes lawful for him to break his fast.

Fourth: One should not hesitate (from breaking his fast) as soon as night falls, and this is according to a consensus among scholars. It is unfavorable to delay breaking the fast, for what is favorable is to hasten it, as indicated by many Ahadeeth.

Fifth: People always seem in a hurry to deny what they are ignorant of. This is clear in the conduct of Bilaal

when he refrained from implementing the order of the Prophet

for he was unaware of the fact that the Prophet

knew that it was lawful to break the fast at that time.

discussed certain matters with the Prophet

by way of precaution or to explore the respective rulings as well as to increase their knowledge, and once they knew they would hasten to comply with his command immediately. This is like the case in which Bilaal

disputed the matter of breaking the fast when he saw the traces of light and the redness that remained a little while after sunset, and thereupon he thought that it would be unlawful to break fasting until it disappeared, and, thinking that the Prophet

did not see it, he wanted to remind and notify him of it.

Seventh: Reminding the Imam or scholar of what is feared that he might have forgotten or been heedless of, and not to persist in reminding him of it after the third time.

Eighth: It is permissible for the one who is ignorant of a particular ruling to think over it and discuss it until he learns it, and the ruling occurs to him.

Ninth: This is a reference to differ with the People of the Book, who would delay breaking their fast until after sunset; and a refutation of the claim of the Raafidhah (a Shee’ah sect) who delay it till stars appear in the sky.

Tenth: It is permissible for the traveler to observe fast if no trouble would befall him.

Eleventh: It is permissible for the fasting person, while breaking his fast, to repeat the words of the Athaan (call to prayer) after the Mu’aththin (caller to prayer), and recite the Athkaar (mentionings of Allah) following the Athaan, because the evidences that support the recommendation of that are general, and no exception is made for people who are engaged in breaking the fast.

Twelfth: In principle, every person in his abstention (from food and drink) during fasting, breaking fasting (when its time is due), and the due times of their prayers, should be subject to the ruling of the land on which they are, or the airspace where they are passing through. If the sun sets on a person while he is in an airport, or he offers the Maghrib prayer and then his plane takes off with him on board towards the West and he continues to see the sun, it would not be binding upon him to keep abstaining (from food and drink), and his prayer and fasting would be valid, for at the time of breaking the fast and offering the prayer, he was subject to the ruling of the land on which he was. If, however, the plane takes off with him a few minutes before sunset (towards the West), and he continues to see the day, it would be impermissible for him to break fasting or offer the (Maghrib) prayer until the sun of the airspace in which he is proceeding sets; and even if he comes upon the sky of a town whose inhabitants have broken their fast and have offered their Maghrib prayer while he is still seeing the sun in the sky, then neither breaking fast nor offering the (Maghrib) prayer would be lawful for him until it sets.

The Muslim’s Tasks on ‘Eed Al-Fitr - I