Accustom Your Child to Generosity in Ramadan 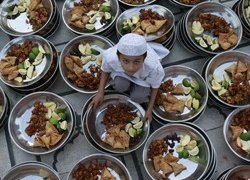 He was a Muslim ruler during the Umayyad reign. He was exposed to vicissitudes of his time and was put in prison. However, some time later, he managed to flee from prison. While he and his slave were walking in the vast desert, they met a shepherd having some sheep. Yazeed said to his slave, "Ask the shepherd to provide us with some of that milk." The slave went to the shepherd and bought some milk from him. Yazeed ordered the slave to give him one thousand Dirhams. The slave said to him, "But, O prince, he does not know you." On that Yazeed said, "But I know myself well."

Dear parent, this is how souls should be: always generous, munificent, giving, doing good in all areas and fields, and in all states, even if it is in the worst conditions and situations, as is clear from what Yazeed ibn Al-Muhallab did.
We favor Ramadan with acts of goodness
No doubt, you like your child to be generous, open-handed and to share the good. There is no better opportunity for him to do so than the blessed month of Ramadan, the month of goodness and generosity, during which the Messenger of Allah,

, as described by Ibn ‘Abbaas, may Allah be pleased with him, was (in readiness and haste to do charitable deeds) more generous than the strong uncontrollable wind which spreads rain, increment and blessings. So, it is necessary to instill love for goodness in our children, utilizing the collective atmosphere of faith in the month of Ramadan, the month of goodness and bounty, to instill the love for spending in your child.
Why should this be done from early childhood?
That is simply because there are many acts of worship which your child should learn from his early childhood and get accustomed to them and do them perfectly once he becomes competent for religious assignments. From among those, a mention may be made of spending on acts of goodness. The love of wealth has a great hold on the heart, and unless your child gets accustomed to loving goodness more than loving wealth, he would not be able to perform this act of worship perfectly.
The best of people are the most beneficial to them
Virtuous parent, if we reflect on the texts of the Quran and the Sunnah (Prophetic tradition) together, we would find that the upright Sharee‘ah (Islamic legislation) has placed the givers of goodness on a high rank. This is because they take from their wealth and food to give to the needy and indigent in the way of Allah The Almighty. And, because they favor others with good, Allah The Almighty honors them with the most abundant reward. In confirmation of that, Allah The Almighty says praising the faithful believers (what means):
The giver of good has Prophetic promises, transmitted to us by the Companions, may Allah be pleased with them. One of those is a promise of being shaded on the Day of Judgment: "Everyone will remain in the shade of his (object of) charity until the judgment between people is over." [Al-Albaani: Saheeh]
Another promise is given to multiply the reward. In this respect, it was narrated on the authority of Abu Mas‘ood Al-Ansaari, may Allah be pleased with him, that he said, “A man brought a bridled she-camel and said, ‘It is (to be given) in the Cause of Allah.’ The Messenger of Allah

said:‘For it, you will have seven hundred she-camels on the Day of Judgment all of which will be bridled.’”[Muslim]
A third promise is that it (the charity) extinguishes the wrath of (Allah) The Most Merciful: "Giving charity in secret extinguishes the wrath of the Lord; maintaining kinship ties increases one’s lifetime; and doing goodness protects one from the foul final stage of life." [Al-Albaani: Saheeh]
Eight practical ways to teach your child generosity:
1.     When your child buys, say, a box of candy, let him put it in a dish and invite his siblings to share it with him.
2.     Guide him to watch informative cartoon movies that invite to generosity and encourage giving, and clarify to him the reward of the doer of good in the world and the Hereafter, and that he will be loved by people.
3.     Encourage him to let his siblings, neighbors and friends share his toys and possessions, and praise him every time he does it so that love for this behavior becomes deep-rooted in his heart.
4.     Buy a moneybox for him, especially in Ramadan, and encourage him to save a daily sum from his pocket money, until the end of the week, then let him take it and give it to a needy or poor person. Do any charitable act as a family. For example, you may collect clothes (for the poor), or money to prepare a meal for the fasting people , and let your child share the children of the family in that project.
5.     Establish teamwork with your children or from the children and boys of the family to collect and distribute Zakat-ul-Fitr. Prepare a list of those who deserve it and divide them into groups, and let each go on his/her area of work; or help them prepare meals for the fasting people, and ask your daughters to prepare the meals by themselves.
6.     If you happen to meet a beggar on the way, give your child a sum of money and ask him to put it in his hand, since this will have a positive impact on the child, and implant in him love for generosity and almsgiving.
7.     Ask your child to serve a meal in Ramadan to a poor person or a neighbor, in order to see for himself how happy this makes him feel. In this respect, do not forget to teach him the right of the neighbor. It was narrated in an authentic Hadeeth that the Messenger of Allah,

, said: "He, who provides a fasting person with food to break his fast, will have the like of his reward, without reducing anything from the reward of the fasting person." [authenticated by Al-Albaani]
An impressive story:
In conclusion, there is, dear parent, an impressive story of a generous child whose parents accustomed him to generosity and doing good from his early childhood. So, let the coming story be your first step to teach your child to be generous:
One day, an employee of the Makkah Charity Institution in Al-Madeenah was sitting in the office of the institution at Hizaam street, when a young child entered upon him, carrying a case filled with money which he placed before the employee. When the child intended to leave, the employee asked him to wait until he openes the case, counted the money it contained and give him a receipt. However, the child insisted that he should not open the case in his presence, nor should he know how much he has given, then he let him go.
The employee said, "I opened the case and found a paper written by the child and it read: "Half the sum should be given to the poor people of Al-Madeenah and the other half should be share in building a mosque." Behold! The sum consisted of mixed gulf coins, like the Saudi riyal, the dirham of the Emirates, the Kuwaiti dinar, Bahraini files, and so on; and the greater part of the sum was in small units of coins, e.g. riyal, half a riyal, a dirham, half a dirham, making a total of almost one hundred and sixty riyals. I sat surprised, and said to myself, "How could such a child give that sum in charity which is too much for him, and Allah knows best how he collected it!" How amazing! This Ummah (nation) is good as long as it still has children like that innocent child.
So, exhort your child to do good; may Allah The Almighty bless us in our children, and make them a valuable treasure for Islam and the Muslims.