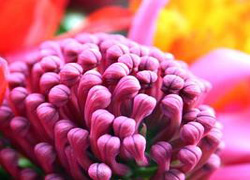 she said, “I asked ‘Aa’ishah

‘Why does the menstruating woman make up for the missed days of fasting but not for the missed prayers?’ She said, ‘Are you a Harooriyyah (i.e. from Harooraa’, referring to the Khawaarij)?’ I said, ‘I am not a Harooriyyah. I simply want to know.’ She said, ‘We used to have this (menstruation), and we were ordered to make up for the days of (missed) fasting, but not for the (missed) prayers.’” [Al-Bukhari and Muslim]

In another narration, she (Mu’aathah) asked: “Should one of us make up for the missed prayers during the days of her menstruation?” ‘Aa’ishah

replied saying, “Are you a Harooriyyah? We used to menstruate (during the lifetime of the Prophet

) and we were not ordered to make up for the missed prayers.” [At-Tirmithi]

said, “We used to menstruate during the lifetime of the Messenger of Allah

commented saying that there is no difference amongst the scholars that the menstruating woman should make up for the missed days of fasting and not for the prayers.

asked the woman whether she was Harooriyyah, she did so out of disapproval because the Harooriyyah is a group of al-Khawaarij (a deviant sect) which is named after a city called Harooraa’ near al-Koofah, where they first appeared. This group was known for their exaggeration and excess in religion. Some of them were of the opinion that it is obligatory for the menstruating woman to make up for her missed prayers, which contradicts Ahadeeth and the Muslims’ consensus. Hence, ‘Aa’ishah

asked her in such a disapproving way.

First: The prohibition of excess and exaggeration in religion and the obligation of adhering to and applying the religious texts and taking the concessions that Allah has granted to His slaves. Just as exaggeration in religion is dispraised, negligence in performing religious duties is also dispraised. The best approach is to follow the moderate way between these two extremes by following all the Sharee‘ah texts.

Second: The permissibility of disapproving of those people who exaggerate in religion in an appropriate manner which would result in achieving the goal of setting them right without bringing about graver harms, and this is what ‘Aa’ishah

Third: If the questioner feels that the Mufti believes him to be an extremist because of his question, he should clarify to the Mufti that he is merely seeking an answer, without meaning to be exaggerate or be extreme, as Mu‘aathah

said, “I am not a Harooriyyah. I am only asking.”  It then becomes obligatory for the Mufti to answer giving evidence that removes any doubt as ‘Aa’ishah

Fourth: The best justification for the Sharee‘ah rulings is that they represent the orders of Allah and His Messenger

justified this ruling by saying that the Prophet

would have ordered them to do so because he was the sincerest adviser for the Ummah (Muslim nation) and did not leave any religious matter without clarifying it. Hence, the Muslim must submit to Allah, glorify His Sharee‘ah and adhere to the authentic Sharee‘ah texts by implementing their orders and avoiding their prohibitions because they are stated by the Sharee‘ah, even if the wisdom and rationale behind them are not apparent.

said, “There is a consensus that the menstruating woman must not fast during her menstruation and must make up for the missed days of fasting and not for the prayers. There is no difference in this regard and all praise is due to Allah. The consensus of Muslims in this regard is the truth and a decisive conclusion that precludes any excuse of doing otherwise.”

Sixth: Giving a concession for the menstruating woman to not make up for the missed prayers during her menstruation is one of the aspects of ease in this religion and a mercy from Allah towards women because it would be difficult for her to make up for the missed prayers, which are repeated every day, unlike the obligatory fasting which is only one month a year. It is obligatory for women to thank and praise Allah for this ease and alleviation of hardship.

Seventh: if the menstruating woman becomes pure and clear of menstruation immediately after the crack of dawn, then her fasting of that day is invalid and she will have to make up for it because dawn broke while she was still in the state of menstruation.

Eighth: if she menstruates even a moment before the sunset, her fasting will be nullified and she will have to make up for this day.

Ninth: if she menstruates even a moment after the sunset, her fasting of that day would have been valid.

Tenth: if a woman feels the moving of the blood of menstruation or its pain while she is fasting, but begins menstruating after sunset; her fasting will be valid.

Eleventh: this Hadeeth indicates that it is permissible for the ill person not to fast even if he has some strength but the fasting may increase the illness. For the menstruating woman does not weaken all at once; rather, it is hard for her to fast because of the bleeding which is considered an illness.