The Way to Perform Voluntary Prayers at Night-II 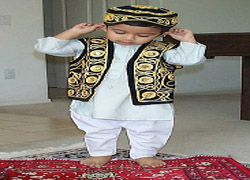 used to be called Al-Watad (pole or peg) because he prayed so much." Al-Qaasim ibn Ma’een said, “Abu Haneefah

spent an entire night performing voluntary prayers reciting this verse in which Allah The Almighty Says (what means): {But the Hour is their appointment [for due punishment], and the Hour is more disastrous and more bitter.}[Quran 54:46] repeating it and weeping and beseeching Allah The Almighty until morning came."

staying up at night to pray when he was a young man." Abu Bakr Al-Marwathi said, “I was with Imaam Ahmad

for nearly four months in the army, and he never stopped performing voluntary prayers at night or reciting the Quran during the day, and I never knew when he completed the Quran, because he kept that a secret."
Imaam Al-Bukhari

“At night he would keep away from people, and spend that time only with his Lord, beseeching Him continually and reciting the Quran, repeating different kinds of acts of worship by day and night. When he began to pray, his body would start to tremble, leaning to the left and right."
Ibn Rajab said concerning his Shaykh Imaam Ibn Al-Qayyim, “He was a man of worship, prayers at night -- and lengthy prayers. I have never seen his equal in worship and knowledge of the Quran, Hadeeth and principles of faith." Al-Haafith Ibn Hajar said, describing his Shaykh Al-Haafith Al-‘Iraaqi, “I stayed with him, and I never saw him forsake performing voluntary prayers at night, it was like a habit for him."
Sleeping on one’s right side:
The Prophet,

taught his Ummah (Muslim nation) to sleep on their right sides, as was narrated in the Hadeeth (narration) of Abu Hurayrah, may Allah be pleased with him, that the Prophet,

, said: “When any one of you goes to bed, let him clear his bed by hitting it with his garment, for he does not know what may have come onto it. Then let him lie down on his right side, then let him say, ‘Bismika Rabbi wadha’tu janbi wa bika arfa’uhu. In amsakta nafsi farhamha wa in arsaltaha fahfath-ha bima tahfathu bihi ‘ibaadaka as-saaliheen (In Your Name, my Lord, I lay myself down and I get up again. If You take my soul, then hhave mercy on it, and if You send it back to me, then protect it with that with which You protect Your righteous slaves).” [Al-Bukhari and Muslim]
It was narrated on the authority of Al-Baraa’ ibn ‘Aazib, may Allah be pleased with him, that the Prophet,

, said: “When you want to go to bed, make ablution as for prayer, then lie down on your right side.”[Al-Bukhari and Muslim] Hafsah, may Allah be pleased with her, said, “When the Prophet

went to bed, he would put his right hand under his right cheek.” [At-Tabaraani]
Imaam Ibn Al-Qayyim

said, “There is a reason for his lying on his right side, which is that the heart is located on the left, so if a person lays on his left side, he will sleep too deeply, because the heart’s position will be too comfortable, but if he sleeps on his right side, he will not be too settled, so he will not sleep deeply."
Sleeping in a state of purity:
We have already quoted the Hadeeth of Al-Baraa’ ibn ‘Aazib, may Allah be pleased with him, that the Prophet,

, said: “When you go to bed, make ablution as if for prayer.”[Al-Bukhari and Muslim] It was narrated on the authority of Mu’aath ibn Jabal, may Allah be pleased with him, that the Prophet,

, said: “There is no Muslim who goes to sleep remembering Allah and in a state of purity except that when he turns over and asks Allah for good in this world and the next it will be given to him.” [Abu Daawood and Ahmad]
It was narrated on the authority of Ibn ‘Abbaas, may Allah be pleased with him, that the Prophet,

said: “Purify these bodies of yours and Allah will purify you, for there is no slave who goes to sleep in a state of purity but an angel spends the night with him, and every time he turns over, [the angel] says, ‘O Allah, forgive Your slave, for he went to bed in a state of purity.’” [At-Tabaraani] [Al-Mundhiri: Good chain of narrators]
Going to sleep early:
Sleeping straight after ‘Ishaa’ is the advice of the Prophet,

, and it is a good and healthy habit as well. One of the Hadeeths that describe its virtues was narrated on the authority of Abu Barzah Al-Aslami, may Allah be pleased with him, that "The Prophet

used to prefer to delay ‘Ishaa’, and he did not like to sleep before it or talk after it." [Al-Bukhari]
Al-Haafith Ibn Hajar narrated that Al-Qaadhi ‘Iyaadh said, concerning the phrase “He did not like to sleep before it”, “Because this could lead to one praying it too late, or delaying it until after the preferred time, and talking after it could lead one to sleeping before Fajr and missing it, or missing performing voluntary prayers at night."
Ibn Raafi’ said, “‘Umar ibn Al-Khattaab, may Allah be pleased with him, used to wave his stick at the people when darkness fell, and would say, ‘Get up and go, may Allah help you to perform voluntary prayers at night!'"
Another matter that has to do with sleep is choosing a suitable bed; not one that is excessively luxurious or soft, because that makes a person sleep too much and become negligent, and causes laziness and carelessness. ‘Aa’ishah, may Allah be pleased with her, said, “The pillow of the Prophet

, when he was lying on a mat of palm fibers that had left marks on his side. ‘Umar, may Allah be pleased with him, said, “‘O Messenger of Allah, why do you not get something more comfortable than this?’ He said: ‘I have nothing to do with this world. My relationship with this world is like that of a traveler on a hot summer day, who seeks shade under a tree for an hour, then moves on.’”[Ahmad and Al-Haakim]
‘Ali ibn Bakkaar

had a slave-girl who would spread out his bed for him, and he would touch it with his hand and say, “By Allah, you are good, and by Allah you are cool, but by Allah, I will not rest on you tonight.” Then he would get up and perform voluntary prayers at night until dawn. One should not sleep too much or too deeply. Ibraaheem ibn Ad-ham said, “If you are sleeping at night, and wandering by day, and always committing sins, how can you earn the pleasure of the One Who is managing your affairs?"

The Way to Perform Voluntary Prayers at Night-I

The Way to Perform Voluntary Prayers at Night-III

The Way to Perform Voluntary Prayers at Night-IV