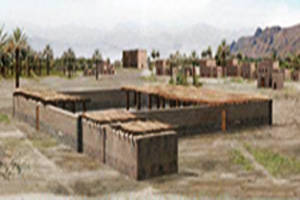 Allah The Almighty Says (what means): {And Allah has made for you from your homes a place of rest.}[Quran 16:80]

You have told the truth, O our Lord! The home is a place of rest, stability, comfort, reassurance, safety and tranquillity, in which we live, and with which we protect ourselves from the heat of summer and the cold of winter. It is also our shelter in which we take refuge after the trouble and toil of the day.

If a little bird's nest is its shelter, place of rest and abode of reassurance, it would be more worthy for man to have his home an abode of happiness and a source of his pleasure. A home is not only walls, furniture and linen, but it is also a place of worship, an institute, and a place for cordiality and comfort. The spouses fill it with love and affection, and tranquillity, calmness and stability shade it.
In the Muslim home, material and sensual rest is combined with spiritual and emotional rest; thereby the home is comprehensive and balanced. Also, Allah The Almighty has made the home a place of rest for the couple; He has made the husband a source of tranquillity for his wife, and the wife a source of tranquillity for her husband. Allah The Almighty Says (what means): {And of His signs is that He created for you from yourselves mates that you may find tranquillity in them; and He placed between you affection and mercy. Indeed in that are signs for a people who give thought.} [Quran 30:21] Thus, marriage is a source of tranquillity, and homes are places of rest – a favor from Allah The Almighty which should be appreciated, maintained and preserved.
Some of us might wonder: “Why a Muslim home? Is there a difference between a Muslim and a non-Muslim home?”
Undoubtedly, the Muslim home differs from any other. Its inhabitants carry in their chests a glorious belief which fills their hearts with the light of faith, and this light is reflected on all aspects of their life. A Muslim person should be (an example of the) Quran among people, the same as was the moral character of the Messenger of Allah,

. For this reason, a Muslim home, with its corners, furniture, and the way it is arranged, should express the Islam of its owner.
The Muslim home might be a simple hut, or a graceful palace, and in either there is pleasure, gratitude, satisfaction and living in the shades of the Noble Quran and Sunnah. The family members are happy, not because they have great furniture or expensive fittings, but because happiness springs from their believing hearts and reassured souls. This is because they are pleased with Allah The Almighty as their Lord, Islam as their religion and Muhammad,

, as their Prophet and Messenger.
The houses of the Prophet,

, were a good pattern for an Islamic home. As small in size and modest in building as they might have been, they were full of happiness and satisfaction, and remained the highest ideal for the homes of the Companions

and any of the Muslims who wished to lay the foundation of a home afterwards.
The houses of the Prophet,

, were as humble, only enough as to satisfy his need, as simple as to cover (the minimum requirements of) his living, they were full of happiness, where their inhabitants were well-pleased with the fate and sustenance endowed to them by Allah The Almighty, and believing in the statement of the Prophet,

: “He, upon whom morning comes while being safe and sound, healthy in his body, and having the sustenance of his day, seems as if the entire world has been granted for him.” [At-Tirmithi and Ibn Maajah]
The houses of the Prophet,

, were based on worship and obedience to Allah The Almighty, where humbleness, simplicity and abstinence from the enjoyment of this worldly life seemed evident. All his houses surrounded the mosque. Some of them were built of palm reeds covered with mud, others of stones piled on top of each other, having their ceiling made of palm reeds.
The home of the Mother of Believers, ‘Aa‘ishah

the dearest of his wives to him after Khadeejah

consisted of one chamber, built of bricks covered with mud, and another room annexed to it, made of palm reeds, covered with animal hair. Its door had a single wooden post, and its ceiling was low, like all the other houses of the Prophet,

. It had simple furniture: a bed of pieces of wood tied with fiber ropes, having a cushion of leather stuffed with fiber; a water-skin; and clay vessels for his food and ablution.
Simplicity and contentment also seemed evident in the homes of the Companions of the Messenger of Allah,

. The furniture of Fatimah

the daughter of the Prophet,

, with which she was wed to ‘Ali Ibn Abi Talib

consisted of a mantle of velvet, a cushion of leather stuffed with fiber, a millstone, a water-skin and two jars. That was the furniture of the leader of the women of Paradise, and the daughter of the master of all the prophets, may Allah exalt their mention. This shows how the houses of the Prophet,

, and of his Companions

were a good model for the Islamic home.
If such was the state of the houses of the Prophet,

this does not mean that Islam impedes one from being blessed in a graceful spacious home; on the contrary, according to Islam, that is a sustenance, favor and grace bestowed by Allah The Almighty upon whomever He pleases. Allah The Almighty Says (what means): {Say, “Who has forbidden the adornment of Allah which He has produced for His servants and the good [lawful] things of provision?”} [Quran 7:32] The Messenger of Allah,

, said: “Four things bring about happiness: a righteous woman (i.e., wife), a spacious residence, a good neighbor, and a comfortable means of transport.” [Al-Hakim] Man then has to utilize this pleasure in all that is good, for he would be held accountable about it on the Day of Judgment as confirmed by Allah The Almighty in the verse (which means): {Then you will surely be asked that Day about pleasure.} [Quran 102:8]
Like other human beings, the Muslim family inclines to possess the best, the most spacious, the prettiest, and the richest of homes. Allah The Almighty Says (what means): {Beautified for people is the love of that which they desire - of women and sons, heaped-up sums of gold and silver, fine branded horses, and cattle and tilled land. That is the enjoyment of worldly life, but Allah has with Him the best return.} [Quran 3:14]
The Muslim family knows well that real happiness is to make the home, whether it is small or large, a garden full of faith, satisfied with contentment, shaded with tranquillity and reassurance; and to have its members adopt high morals and upright conduct. It perceives that in whichever state it might be, it is living in a favor bestowed by Allah The Almighty for which gratitude is due. Gratitude for a favor develops, purifies and proliferates it as confirmed by Allah; Allah The Almighty (what means): {If you are grateful, I will surely increase you [in favor].} [Quran 14:7]
The Muslim family neither boasts nor shows pride over others because of the favors of Allah The Almighty bestowed upon it. It always shows the bounty and favor conferred by Allah The Almighty upon it in response to His statement (which means): {But as for the favor of your Lord, report [it].} [Quran 93:11]  And, acting upon the statement of the Messenger of Allah,

: “Indeed, Allah likes to see the signs of His favor on His slave.” [At-Tirmithi and Al-Hakim]
But, at the same time, the Muslim family should not engage in worldly pleasures and neglect obedience to Allah The Almighty, nor be mainly concerned with their house in this worldly life, which diverts them from working for their house in Paradise, Allah willing. To this meaning a poet refers, by saying that one shall have no abode to reside in after death other than the one he built before his death. If he built it well, his residence (in the Hereafter) would be good; and if he built it with evil, he would fail.
Once, ‘Ali Ibn Abi Talib

passed by a man who was building a house, thereupon he said to him, “You were dead before you came to life, and in a short while you will be dead [yet again]. You are building a house for the perishing abode [i.e. this worldly life], so build a house for the eternal abode [i.e. the Hereafter as well].”
Blessed be the Muslim family if it is to have the world in its hand and not in its heart; and blessed be it if it is to utilize all things surrounding it correctly in such a way as to help it obey Allah The Almighty, acting upon the following wisdom, “Work for your worldly life as if you would live forever, and work for your Hereafter as if you would die tomorrow.” [Ibn Al-Mubarak in Az-Zuhd]
To talk about the Muslim home, its components and furniture, does not mean that all those specifications should be comprised in every home. But, it is an ideal we ask Allah The Almighty to give to every Muslim on the face of the earth.
The main point lies not in the walls and furniture of the house so much as it lies in its inhabitants. Hence, every family member could bring about happiness and satisfaction to his household with the smallest thing available to him. The faithful believer is intelligent and prudent, as the Messenger of Allah,

, said: “The sagacious one is he who holds himself accountable [for his deeds], and works for [the life] after death; and the incompetent is he who subjugates his self to its fancies and has hopeful expectations from Allah.”[Ahmad, At-Tirmithi and Ibn Majah]