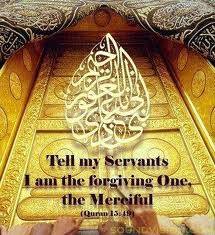 Allah, The Almighty, extends His Mercy to all His creation, for He knows that man was created weak and is prone to fall into sin. After promising His Mercy to humanity, Allah, The Almighty, informs them that as long as they call on Him and put their hope in Him, He will forgive them. This statement alone can convince one to have hope and never despair.

In fact, The Mercy of Allah, The Almighty, extends to all His creation, not just humanity. Abu Hurayrah

said: “Allah has one hundred parts of Mercy, of which He sent down one between the jinn, mankind, the animals and the insects; by means of which they are compassionate and merciful to one another, and by means of which wild animals are kind to their offspring. And Allah has kept back ninety-nine parts of mercy with which to be merciful to His slaves on the Day of Resurrection.” [Muslim]

It was narrated that ‘Umar ibn Al-Khattaab

said: “Some prisoners were brought to the Messenger of Allah

and there was a woman among the prisoners who was searching (for her child). When she found her child she embraced him and put him to her breast. The Messenger of Allah

said to us: ‘Do you think that this woman would throw her child in the fire?’ We said, ‘No, by Allah, if she is not obliged to do so.’ The Messenger of Allah

said: ‘Allah is more merciful to His slaves than this woman is to her child.’” [Al-Bukhari and Muslim]

One aspect of the Mercy of Allah to His slaves is that He sent them Messengers and revealed the Books and laws to organize their lives in a wise manner, far from hardship and difficulty. Allah, The Almighty Says (what means): {And We have sent you (O Muhammad) not but as a mercy for the ‘Aalameen (mankind, jinn and all that exists).} [Quran 21:107]

The Mercy of Allah, The Almighty, is the means through which His believing slaves will be admitted to Paradise on the Day of Resurrection. No one will ever enter Paradise because of his deeds alone, as the Prophet

said: “No one will enter Paradise thanks to his deeds.” They said, “Not even you, O Messenger of Allah?” He

said, “No, not even me, unless Allah shower me with His Mercy. So try to be close to perfection. And no one should wish for death; if he is doing good deeds, he will do more of them, and if he is sinning, he may repent.” [Al-Bukhari and Muslim]

- {Declare (O Muhammad) unto My slaves, that truly, I am the Oft-Forgiving, the Most-Merciful. And that My Torment is indeed the most painful torment.} [Quran 15:49-50]

- {Say: O My servants who have transgressed against their own souls, despair not of the mercy of Allah. Indeed, Allah forgives all sins. Truly, He is Most Forgiving, Most Merciful.} [Quran 39:53]