Adorn Yourself with Worship in the Last Nights of Ramadan 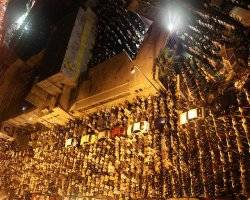 During the last days of Ramadan, the righteous predecessors stood (in prayer) at night, awakened their families, engaged in worship more diligently, kept aloof from women, and stood day and night in prayer and in worship of their Lord, in expectation of His reward. They raised their hands towards Allah The Almighty, supplicating Him not to let them return with failure, to grant them His bounties, and to do good to them. At the same time, they would adorn themselves on those nights, in which the Night of Al-Qadr is expected. They got adorned outwardly and inwardly, though the internal adornment is more important. Some of the Companions of the Messenger of Allah,

, would wear new clothes on those nights. Tameem, may Allah be pleased with him, had a new suit which he used to wear on the night of Al-Qadr, and then fold it until the coming year. In doing so, he prepared himself for the meeting of Allah The Almighty, and entering upon the Lord, and adorned himself, waiting for the reward of Allah The Exalted.

People should be keen on such outward adornment. They should perform Ghusl (ritual bath) on the odd nights where the Night of Al-Qadr is confirmed, get adorned and decorate their mosques, in the expectation of entering upon their Lord with that outward adornment. Nevertheless,  they should keep in mind that the outward adornment is of no avail without the inward adornment. That is, one should mend the heart, turn in repentance to Allah The Almighty, give up wrongdoings, sins and misdeeds, decide not to return to the sin once again, seek the forgiveness of Allah The Almighty for the previous mistakes, and settle the relationship between him and his Lord, and between him and people. With that internal adornment, he should hope to enter upon Allah The Almighty.
What is the value of his outward adornment if his inner self is in such a state of bad morals, laziness in worship, rancor, envy, resentment, severance of ties, hatred, altercation, heedlessness of Allah The Almighty, and lacking readiness for meeting Him? How could he get the reward of the Lord? "Whoever does not give up false speech, nor refrain from acting upon it, then, Allah is not in need of his leaving his food and drink." [Al-Bukhari]
Allah The Almighty did not forbid him from food and drink to reward him for that (while fasting), and then he commits what is unlawful.
During the period of I‘tikaaf (seclusion), eminent Imaams such as Imaam  Ahmad

and others refrained from talking to anyone -- even for the purpose of knowledge and religious study. They did so in order to be able to devote themselves wholeheartedly to the Lord, seek to fulfill the responsibility of faith and the means of forgiveness he should strive against himself to attain.
As high as his degree might be, the Messenger of Allah,

, did all of this relentlessly throughout those days. It was narrated that it was said to him: "You continue fasting without a break." The Hadeeth (narration) shows that he continued fasting without a break, especially throughout his last days, to dedicate his time and effort to approaching his Lord, devote his heart and mind to Allah The Almighty, and receive the Divine revelations and pleasure, love and closeness to his Lord and be reassured by remembering Him. That was his means of sustenance. Hence, he said: "I am not like anyone of you, because during the night I am given food and drink by my Lord." [Al-Bukhari and Muslim] Of course he did not mean real food and drink, otherwise, he would not be considered to have continued fasting without a break. He rather meant the divine revelations that he received, the remembrance of Allah The Almighty, solace with Him, approach to Him, and those great gifts of Allah The Almighty.
This is why the Prophet,

, continued fasting without a break, and so did his Companions. They did so in order to follow his guidance, devote themselves to the worship of Allah The Almighty, and engage their mind in drawing closer to their Lord, in the expectation of His prize, and seeking that night, the Night of Al-Qadr, perchance they would witness it and receive its blessings.