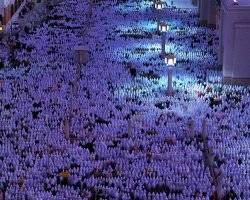 The righteous predecessors in the past did not concern themselves with how much they spent and strove, in so much as whether or not it was accepted from them. In other words they spent their time, property, effort and souls, and towards the end they waited apprehensively, not knowing whether their deeds would be accepted from them. After one spends his day in fasting and night in standing (in prayer), after he spends his property and soul, and striving harder in all acts of obedience, he then stands waiting, wondering after all of this whether, his deeds will be accepted.
The believers do so after a period of great striving rather than after their indulgence, negligence, sleep and laziness. It was their habit to hasten to good, as clarified by Allah The Almighty. They used to hasten to Allah The Almighty in spending their property and soul; and if they found nothing to spend for the sake of Allah The Almighty, they would weep and their eyes would overflow with tears, out of grief over finding nothing to spend. Then, towards the end of their deeds, the first thing, as described by Allah The Almighty, to possess their hearts, worry them, and make them sleepless, was whether or not their deeds had been accepted. In relation to this Allah The Almighty Says (what means): {And they who give what they give while their hearts are fearful because they will be returning to their Lord.} [Quran 23:60]
‘Aa’ishah, may Allah be pleased with her, asked whether they are those who neither pray nor fast, but the Prophet

said: "No! They are those who pray, fast, give in charity, and do such-and-such (righteous) deeds, and then feel afraid that they would not be accepted from them." [At-Tirmithi and Ibn Maajah] It is the explanation of the words of Allah The Almighty who Says (what means): {Indeed, Allah only accepts from the righteous [who fear Him].} [Quran 5:27] Ramadan has been opened so that one would fear Allah The Almighty. So, who has attained that righteousness that comes at the end of his deeds and say that his deeds have been accepted, and that he has to wait for the reward of Allah The Almighty?
It was narrated by Al-Haafith Ibn Hajar on the authority of Ibn ‘Umar, may Allah be pleased with them both, that he said, "Were I to know that Allah The Almighty accepted from me of my deeds (even as little as) an atom's weight, or (as small amount as) a Dirham in charity, nothing absent would have been dearer to me than death." [Fat-h Al-Baari] In confirmation of that, Allah The Almighty Says (what means): {Indeed, Allah only accepts from the righteous [who fear Him].} [Quran 5:27]
It may be argued that if this is the case, nothing remains for him in this world. He worked to attain the forgiveness and mercy of Allah The Almighty and emancipation from Hell, perchance Allah The Almighty would accept his deed, turn to him in repentance, and deliver him from the Fire: {So he who is drawn away from the Fire and admitted to Paradise has attained [his desire].} [Quran 3:185] If he has attained his desire, then, why would he like to stay in this world?
He does all of this in the world just for the sake of the moment when: {Indeed, Allah only accepts from the righteous [who fear Him].} [Quran 5:27]
This is why they were mainly concerned with the acceptance of the deed after striving their utmost in it. This is the very state in which the believers in should be in these days: to consider what they have sent forward of deeds to be fit for the forgiveness, and whether or not these deeds would be accepted. This is confirmed by the Messenger of Allah

in his statement: "Disappointed and lost is the one who witnesses Ramadan without his being forgiven." [At-Tabaraani] This is the one whose deeds were neither accepted nor were a cause of forgiveness.