The Key to the Gate Called Rayyaan – II 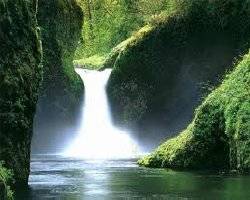 Every Ramadan, we observe some people spending their nights playing cards and their days waiting to feast on food after breaking the fast. Indeed, they never experience the true spirit of Ramadan, as they are always suffering from some worry and worldly concern.
In the case of some women, their only concerns are clothes and makeup. They spend their nights shopping and they have nothing beneficial to say, other than, "Her dress is beautiful," and "Her shoes do not match the color of her dress." They spend Ramadan engrossed in recipe books, hence, when Ramadan is over their soul has not experienced the tranquility of reciting the Quran.

was reciting a line of poetry in the early hours of dawn, so Haram ibn Hayyaan

knocked at his door. When he opened it, he hit him on the head with his stick, saying, “O my nephew, do you recite poetry at the time when The Most Merciful descends?”

What should we be saying today, with our TVs and satellite channels that broadcast programs day and night, as if Ramadan was intended to be an occasion to broadcast eye-catching ads and movies.

Ramadan is the key to Rayyaan, as Ibn Khuzaymah narrated that the Prophet

Fortunate is the one who owns the key to this door, safeguards the fast, does not violate sanctities, turns off the TV channels and abandons songs. The key to Rayyaan has thirty teeth; each day of Ramadan is one of them. How unfortunate are those who come with the teeth of their keys broken and crushed! On the day when everyone will use their key to open the door, the one who loses Ramadan will stand helpless beside the door.

Ramadan calls us to return to the morals of Prophet Muhammad

which we do not see any more in our houses, streets, schools and mosques. How far removed was Muhammad

from our selling and purchasing transactions, and even from our prayers? When the Ummah (Muslim nation) abandoned his way and lifestyle, it became imperative for it to re-program its mind to amend its behavior. Does the Muslim Ummah not understand that Muhammad

established the basics of democracy centuries ago?

influenced the hearts and souls of people with his good morals and ethics. He led humanity with love, not with weapons. He never knew guile and deceit. He established real human rights, the likes of which are unequalled by human rights organizations even today.

On the Day of Badr, the Prophet

was straightening the lines before the battle. Sawaad ibn Ghaziyyah

stood slightly forward from the rest of the line, so the Prophet

went to him and gently prodded his midriff with an arrow, saying: "Stand in line, Sawaad."

seized the opportunity and said, "O Messenger of Allah, you hurt me! I insist upon retribution." How strange, to demand retribution from the leader of the army! When the Prophet

finished straightening the rows in the army, he called: "Come on, Sawaad."

hurried across the lines with his sword in his hand. Fear invaded the hearts of the Companions and they shed tears upon watching their beloved Prophet in this unusual scene of justice. The Companions raised their swords but the Prophet

made a sign with his hand, asking them to leave him. Sawaad

but he threw down the sword and embraced the midriff of his beloved, shedding tears. The Prophet

asked him what had prompted him to do this, whereupon Sawaad

said, "O Messenger of Allah, we are about to face our enemy and it is my wish that my skin touches yours before my death."

What a great Prophet! He taught a whole nation to establish justice before it engaged in battle, for if it fought while it was unjust, it could never win.

Beware of the supplication of the wronged:

while he was beating his slave with a whip for a mistake he had made. The Prophet

called out to him, so he stopped and his face went red, feeling ashamed that the Prophet

saw him beating his slave angrily. The Prophet

said to him: "Abu Masood, if your power tempts you to wrong people, remember the power of Allah over you. Know, Abu Mas‘ood, that Allah has more power over you than you have over this boy."

The whip fell from Abu Mas‘ood's hand and he said, "He (his slave) is free for the sake of Allah." Thereupon, the Prophet

replied: "If you had not done this, Hell would have scorched you on the Day of Judgment."

These are the human rights of servants and laborers. However, we do not see this justice nowadays. How many servants are there who suffer pain, how many laborers complain of injustice?

Ramadan is your life, so why do you waste it? Do not jeopardize these precious days of your life; you may regret them when you are alone in the grave.

The Key to the Gate Called Rayyaan - I