Ramadan: The Month of Maintaining Kinship Ties - I 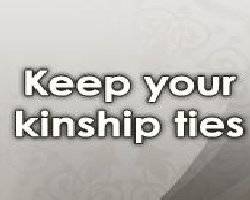 Ramadan is the month of righteousness and the month of sympathy and mercy, thus by default it is the month of maintaining ties of kinship. During this month hearts are softened by remembering Allah The Almighty and souls respond to the one who calls towards Him. The outcome of this is nothing but good deeds and drawing nearer to the Lord of the heavens and the earth.

Many Sharee‘ah (Islamic legislation) texts emphasize the great value of maintaining ties of kinship and its virtues, along with warning against severing them. Allah The Almighty Says (what means):
·        {And fear Allah, through whom you ask one another, and the wombs.} [Quran 4:1].
·        {So would you perhaps, if you turned away, cause corruption on earth and sever your [ties of] relationship? Those [who do so] are the ones that Allah has cursed, so He deafened them and blinded their vision} [Quran 47:22-23].
In addition, the Prophet,

said: "The severer would not enter Paradise." [Al-Bukhari and Muslim]Sufyaan

explained it in his narration as "the one who severs the tie of kinship". The Prophet,

, also said: "He who likes that his sustenance should be expanded and his age lengthened should join the ties of kinship." [Al-Bukhari and Muslim]
Moreover, the Prophet,

said: "Allah created the creation, and when He finished from His creation the Rahim (womb) got up, and Allah said (to it):"Stop! What do you want? It said, "At this place I seek refuge with You from all those who sever me (i.e. sever the ties of kinship.)" Allah said: "Would you be pleased that I will keep good relations with the one who will keep good relations with you, and I will sever the relation with the one who will sever the relation with you? It said, 'Yes, 'O my Lord.' Allah said (to it), 'That is for you.' " [Al Bukhari and Muslim]
Hence, we realize the great status of maintaining ties of kinship and that it is a sign of faith in Allah The Almighty and the Last Day, that it is a reason for ample sustenance and prolonged lives, and that it fosters the relationship between Allah The Almighty and those who maintain the bond of kinship. Moreover, it is one of the greatest reasons for entering Paradise, facilitating the reckoning of deeds, redemption of sins, and leads to thriving houses and protection from a bad end. It is one of the issues that are agreed upon unanimously in the divine religions and acknowledged by those possessing sound dispositions. Moreover, it presents evidence that the one who maintains kinship ties enjoys a generous soul, a broad mind, a good origin and an excellent degree of faith. It elevates his rank, fosters his good reputation, necessitates the spread of love and reinforces the honor of those who observe it.
O fasting people, maintaining ties of kinship is the opposite of severing them. It signifies kind treatment to relatives and close relations. This can be achieved by visiting them, seeking to know more about their state of affairs, asking about them, presenting gifts to them, giving charity to the poor among them, being nice to the rich and noble among them, respecting their old and showing mercy to their young.
This can be also achieved by hosting them, receiving them cordially, appreciating them, sharing their happy occasions and consoling them in their sad ones. Moreover, one should supplicate for one’s relatives, bear no grudge towards them, be keen on advising them, call them to goodness, enjoin them to good deeds, forbid them from evil ones and reconcile the relations between them if quarrels occur. This should continue, even if the relatives are righteous, upright or modest on their own.

However, if the relatives are disbelievers ordisobedient, one should advise and remind them, exerting effort in doing so. If there appears to be no hope in guiding them, whether because they are stubborn or arrogant or because he fears he may deteriorate and sink in delusion with them, he should keep away from them, avoid them graciously, in an unobtrusive manner , and ask Allah The Almighty to guide them. If he meets them by coincidence or if there is an opportunity to call them to Allah The Almighty, he should do so and repeat it as often as possible.