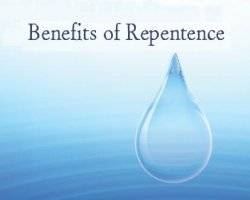 When Allah The Almighty created Aadam

He decreed that he and his children are not infallible. The Prophet

said: “Every son of Aadam makes mistakes, and the best of those who make mistakes are those who frequently repent.” [At-Tirmithi] [Al-Albaani: Hasan] Man will continue to err and sins will continue to attack him from time to time. No one will be safe from sins and errors except those who are protected by Allah The Almighty. The  Messenger of Allah

said: "By Him in whose hand my life is, if you were not to commit sins, Allah would remove you out of existence and He would replace you with those who would commit sins and seek forgiveness from Allah, and He would forgive them." [Muslim]

In such circumstances, there is no way other than repentance and returning to Allah The Exalted. Sins ring a bell of danger that threatens the sinner's worldly life and Hereafter. He does not have any other means except repenting to The Forgiver of sins and The Acceptor of repentance. Otherwise, he would not be able to live in ease and tranquility: {And whatever strikes you of disaster - it is for what your hands have earned; but He pardons much.} [Quran 42:30]
Allah The Almighty orders all the believers to repent without any exception. He also associated their success with repentance as He Says (what means): {And turn to Allah in repentance, all of you, O believers, that you might succeed} [Quran 24:31] The month of Ramadan is an opportunity for answering this call and abandoning forbidden acts. The one who abstains from food, drink and sexual intercourse during the day, knowing that they are originally permissible, should more importantly abstain from whatever is forbidden. If a person does not repent in Ramadan, when would he repent?
O sinner, listen to Allah The Almighty calling His slaves and Saying (what means): {O you who have believed, repent to Allah with sincere repentance. Perhaps your Lord will remove from you your misdeeds and admit you into gardens beneath which rivers flow [on] the Day when Allah will not disgrace the Prophet and those who believed with him. Their light will proceed before them and on their right; they will say, "Our Lord, perfect for us our light and forgive us. Indeed, You are over all things competent."} [Quran 66:8]
Commit yourself to His gate, throw yourself into His hands and repent with sincere repentance of all your sins and misdeeds. Remember that repentance has conditions without which it would not be accepted, namely:
1-    Giving up the sin and completely stopping it. If you were abandoning a duty, you should perform it and if you were committing a forbidden act, you should abandon it.
2-    Regretting committing the sin. The Prophet

said: "feeling regret is repentance." [Ibn Maajah] [Al-Albaani: Saheeh]
3-    Determining never to repeat the sin.
The previous conditions apply in case the sin pertains to the rights of Allah The Exalted. However, if the sin is related to the rights of another person, the following should be added to the previous three:
The repentant person should free his liability from the owner of the right. If he had taken money or something, he should return it to its owner. If he had backbitten someone, he should seek his pardon. If there was a certain punishment for the sin such as slander, he should enable him to punish him or seek his pardon. If he misses one of the conditions in both cases, his repentance will not be valid.
Some scholars add another condition to the above one, which is sincerity. That is to say to direct his repentance for the sake of Allah The Almighty, desiring His forgiveness and reward and fearing His punishment.
If these conditions are met and the repentant person is sincere in his repentance, let him receive the glad tidings of great blessings, because repentance:
-         Is a reason for the love of Allah The Exalted who Says (what means): {Indeed, Allah loves those who are constantly repentant and loves those who purify themselves.} [Quran 2:222]
-         Is a reason for stepping outside the circle of the wrongdoers. Allah The Almighty Says (what means): {And whoever does not repent - then it is those who are the wrongdoers.} [Quran 49:11]
-         Is obedience to Allah The Almighty who Says (what means): {And turn to Allah in repentance, all of you, O believers, that you might succeed.} [Quran 24:31]
-         Is a reason for erasing sins: "The repentant from a sin is like the one who has not committed any sin." [Ibn Maajah] [Al-Albaani: Hasan]
-         Is a reason for success in the life of this world and in the Hereafter. Allah The Almighty Says (what means): {But as for one who had repented, believed, and done righteousness, it is promised by Allah that he will be among the successful.} [Quran 28:67]
-         Turns sins into good deeds. Allah The Exalted Says (what means): {Except for those who repent, believe and do righteous work. For them Allah will replace their evil deeds with good. And ever is Allah forgiving and merciful.} [Quran 25:70]
-         Is a reason for ample provisions as Allah The Almighty Mentioned that Nooh said (what means): {And said, 'Ask forgiveness of your Lord. Indeed, He is ever a Perpetual Forgiver. He will send [rain from] the sky upon you in [continuing] showers. And give you increase in wealth and children and provide for you gardens and provide for you rivers.} [Quran 71: 10-12]
-         Gives refuge from torture and desolation and fosters intimacy and mercy: {So flee to Allah. Indeed, I am to you from Him a clear warner.} [Quran 51:50]
-         Purifies the heart of the repentant person. Abu Hurayrah

said: “If the slave commits a sin, a black spot appears on his heart. But if he gives it up, seeks forgiveness and repents, his heart will be cleansed, but if he repeats it, the blackness will increase until it overwhelms his heart. This is the stain which Allah mentions in the verse (which means): {No! Rather, the stain has covered their hearts of that which they were earning.} [Quran 83:14]" [At-Tirmithi] [Al-Albaani: Hasan]