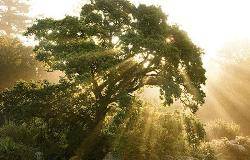 would teach his wives to guard their tongues:

Due to the numerous harms of the tongue, the Muslim husband should instruct his wife and teach her how to guard her tongue and use it appropriately. Two of the most destructive diseases of the tongue which a husband should be especially wary of are backbiting and tale-bearing. The Prophet,

, was very keen to protect his wives from any such diseases and would immediately correct them and instruct them in this regard.‘Aa’ishah

said, “I said to the Prophet

‘Such and such a matter of Safiyyah is sufficient for you (meaning that she was a woman of short stature).’ He

said: ‘You have uttered a statement that would pollute the (entire) sea if it were mixed in it.’”

further stated, “I once imitated a person in his presence and he said:‘I would never like to imitate anyone, even (if I was paid) such and such an amount (for doing so).’”[Abu Dawood and At-Tirmithi]

would teach his wives to control their tongues, even with their enemies:

said, “A group of non-believers once came to the Messenger of Allah

said, “I said, ‘Death be upon you, and the curse of Allah and His wrath!' He

said, “O Messenger of Allah! Did you not hear what they said?” He,

, said: ‘Did you not hear me replying to them with the same term? Allah does not like the use of coarse language.’[Al-Bukhari]

In spite of the fact that those disbelievers were his enemies, the Prophet,

, limited his retaliation to the extent to which he was wronged and did not transgress, otherwise, people would become accustomed to using strong language with one another.

Jealousy is a natural feeling in women, and the Prophet,

, dealt with this in a manner that reflected his wisdom and tolerance. Anas

. She, may Allah be pleased her, therefore took hold of the plate and threw it, smashing it to pieces. The Prophet

then gathered the food and the broken pieces of the plate and said (jokingly): ‘Your mother (i.e. the Mother of the believers) has become jealous.’Then she

regretted what she had done and asked him

how to expiate for the mistake, so he

commanded her to replace the broken plate by sending one of her own to the wife whose plate she had broken.” [Al-Bukhari]

would entertain his wives:

said, “Once I went out with the Messenger of Allah

on a journey and after we had travelled for some time, he commanded his Companions to go ahead and leave us behind them. When they were far enough ahead he

said to me: ‘Let us race.’So we raced, and I won. A few years later, and after I had put on some weight, he

took me along on another journey, and after we had travelled for some time, he commanded his Companions to go ahead and leave us behind them. When they were far enough ahead he

said to me: ‘Let us race.’We raced and this time he