Fruits of Reliance upon Allah The Almighty 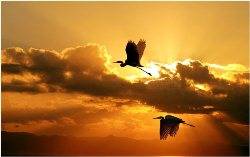 Allah The Almighty Says (what means): "If Allah should aid you, no one can overcome you; but if He should forsake you, who is there that can aid you after Him? And upon Allah let the believers rely." [Quran 3:160]

The command of Allah The Almighty in the verse to rely upon Him came after the mention of victory so as to show that one of the means of attaining victory is to rely upon Him.

2. Protection from the accursed devil:

Allah The Exalted Says (what means): "Indeed, there is for him no authority over those who have believed and rely upon their Lord." [Quran 16:99]

He, who relies upon Allah The Exalted, will never fear anyone or anything. It was reported that Anas ibn Maalik, may Allah be pleased with him, said, "The Prophet

was the best and most courageous of people. Once the people of Madeenah were frightened (having heard a loud sound); so, the Prophet, sallallaah 'alayhi wa sallam,met the people while he was riding an unsaddled horse belonging to Abu Talhah and carrying his sword (slung over his shoulder). The Prophet

said, "We went out on a scary night and passed by a thicket where we saw a sleeping man and his horse was tied beside him. We woke him up and exclaimed, 'How could you sleep in the open thicket like that?’ The man woke up, raised his head, looked at us and said, 'I feel bashful and ashamed to fear other than Allah The Almighty, the Owner of the Honorable Throne.' He uttered these words and went back to sleep."

‘Umar ibn Al-Khattaab, may Allah be pleased with him, reported that the Prophet

said:"If only you rely upon Allah with due reliance, He would provide you with sustenance as He provides birds; they leave (their nest early) in the morning hungry and then return in the evening with their bellies full." [Ibn Maajah and At-Tirmithi]

5. An indication of true faith:

Allah The Almighty Says (what means): {The believers are only those who, when Allah is mentioned, their hearts become fearful, and when His Verses are recited to them, it increases them in faith; and upon their Lord they rely –} [Quran 8:2]
Allah The Almighty also Says in seven verses (what means):{… Upon Allah the believers should rely.} [Quran 3:122]
Sa‘eed ibn Jubayr

said, "Reliance upon Allah is the essence of faith." [Az-Zuhd by Hannaad] Moreover, Ibn Al-Qayyim

in his book At-Tawakkul, related, "‘Awn ibn ‘Abdullaah reported,
'A grief stricken man was sitting in a garden in Egypt during the Fitnah of Ibn Az-Zubayr, may Allah be pleased with him, scraping the ground with something. A man with a shovel passed by this man and asked him, 'Why are you sad and depressed?’ The sad man looked as if he despised the questioner and said, 'Nothing.' The man inquired, 'Are you sad over a worldly affair; indeed, this life is ephemeral. The fleeting pleasures of this life are for both pious and impious people, yet the Hereafter is a promised day when Allah, the Just and Powerful, will judge between falsehood and truth.’

‘The sad man liked his words and responded on the condition of the Muslims nowadays. The man answered him, 'Indeed, Allah The Exalted will save you due to your compassion and love for your fellow Muslims; implore Allah The Exalted; for who has beseeched Him and his supplication was rejected? Who has asked Him and his request was denied? Who relied upon Him and faced failure? Who trusted Him and was disappointed?’

‘The sad man supplicated: 'O Allah, save me and save others from me.’ Allah The Exalted protected him and his people from that Fitnah and they were not afflicted by any harm.”

7. Winning the love of Allah The Almighty:

8. The best fruit is entering Paradise:

Allah The Almighty Says (what means):{And those who have believed and done righteous deeds – We will surely assign to them of Paradise [elevated] chambers beneath which rivers flow, wherein they abide eternally. Excellent is the reward of the [righteous] workers * Who have been patient and upon their Lord rely.} [Quran 29:58-59]

Moreover, Ibn ‘Abbaas, may Allah be pleased with them, narrated that the Prophet

said:
"Nations were displayed before me; one or two prophets would pass by along with a few followers. A prophet would pass by accompanied by nobody. Then a large crowd of people passed in front of me and I asked, ‘Who are they? Are they my followers?’ It was said, 'No. It is Moosa (Moses) and his followers. It was said to me, 'Look at the horizon.' Behold! There was a multitude of people filling the horizon. Then it was said to me, 'Look there and there about the stretching sky! Behold! There was a multitude filling the horizon,' It was said to me, 'This is your Ummah out of whom seventy thousand shall enter Paradise without reckoning.'"

entered his house without telling his Companions, may Allah be pleased with them, who they (the seventy thousand who will enter Paradise without account) were. So the people started talking about the issue and said, "It is we who have believed in Allah and followed His Messenger; therefore those people are either ourselves or our children who are born in the Islamic era, for we were born in the pre-Islamic Period of Ignorance.''

heard of this, he came out and said: "Those people are those who do not seek Ruqyah, nor do they believe in or see an evil omen in things nor do they get themselves branded (cauterized), but they depend (only) upon their Lord." [Al-Bukhari and Muslim]

Reliance should be only upon Allah:

Hence, seeking other than Allah The Almighty for help is permissible, but reliance upon any other than Him, the Exalted, is impermissible.