I‘tikaaf is a Confirmed Sunnah 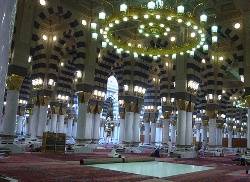 Praise be to Allah, Who is, concerning His servants, Acquainted and Seeing. Out of His bounty and grace, Allah rewards much for little deeds. May He exalt the mention of the Prophet, Muhammad

who was sent as a guide, a bringer of glad tidings and a warner, as well as that of his family and Companions.

Ramadan is a wonderful season for those who seek salvation and endeavor to free themselves from Hell. The month is distinguished by verification of the acts of worship, multiplication of rewards and the descent of mercies. From the other distinguishing characteristics of this month is the last ten days thereof. It was narrated on the authority of ‘Aa’ishah, may Allah be pleased with her, that she said, "The Prophet

(may Allah exalt his mention), would exert his best (in worship) during the last ten days (of Ramadan) more than at other times." [Muslim]

It was also narrated on her authority that she, may Allah be pleased with her, said, "With the start of the last ten days (of Ramadan), the Messenger of Allah

used to tighten up his loincloth (i.e., refrain from sexual intercourse), stay up at night and keep his family awake." [Al-Bukhari & Muslim]

It was also narrated that she said, "The Prophet

would pray and also sleep during the nights of the first twenty days of Ramadan. But when it was the last ten nights, he would be more diligent and tighten up his loincloth." [Ahmad]

I‘tikaaf is one of the special acts of the last ten days of Ramadan. It is to stay at the Masjid (mosque) with the sole intention of worshipping and obeying Allah there. It is based on evidence from the Quran and the Sunnah. In the Quran, Allah The Almighty Says (what means): {And do not have relations with them as long as you are staying for worship in the mosques.} [Quran 2: 187] In the Sunnah it was narrated on the authority of ‘Aa’ishah, may Allah be pleased with her, that the Prophet

ceaselessly observed I‘tikaaf during the last ten days of Ramadan until he died. Then his wives did the same after him. [Al-Bukhari & Muslim]

I‘tikaaf is one of the deserted recommended acts of worship, which is only observed by a few while many are heedless of it. Az-Zuhri

commented, "How strange are the Muslims! Why do they neglect I‘tikaaf when the Prophet

did not leave it from his arrival at Madeenah until his death?"

My dear Muslim, you should hasten to revive this great Sunnah, urge people and encourage them to perform it, starting with yourself. This worldly life is nothing but a few stages and a few days, so get rid of all the worldly obstacles and beauties and be keen to attain this great reward. Allocate these few days to free yourself of all distractions and tasks and move to Allah with your heart and whole being in humbleness, submissiveness, and tears in order to join the procession of the successful.

Be keen to perform I‘tikaaf in a mosque where there is neither overcrowding nor noise and disturbance. Choose a mosque where no one knows you and where you know no one as well. This is more likely to help you dedicate your intention and free your heart and mind of talking to people, sitting and socializing with them. If you perform I‘tikaaf at one of the two Holy Mosques, avoid taking up the space of other worshippers. Rather, make room for others to pray. Do not be one of those who like to show others that they are observing I‘tikaaf so that they would greet you or make room for you. Some observers of I‘tikaaf sometimes abandon the Taraaweeh and Qiyaam prayers (the voluntary prayers at night in Ramadan) and confuse disturb others with engaging in loud vain talk.

I‘tikaaf is recommended at any time. A Muslim can start and end it anytime he wants. However, it is better to perform it during Ramadan, and particularly in the last ten days. After performing the Fajr (dawn) prayer of the 21st of Ramadan, one should start I‘tikaaf and stay at the mosque until he goes out to perform the ‘Eed prayer, as this is the recommended time for ending it.

It is indeed a great opportunity for just a few hours so that the Muslim may utilize this seclusion from people and free himself for the worship of Allah at one of His mosques. He does so with the sole intention of seeking reward from Allah as well as witnessing Laylatul-Qadr (the night of Divine Decree) before the end of life and facing reckoning before Allah The Almighty.

Dear observer of I‘tikaaf, be keen to intensively remember and mention Allah, recite the Quran, pray and worship. Avoid whatever distracts you of worldly affairs. It is permissible to engage in lawful talk with your family or others for an interest need. It was narrated on the authority of Safiyyah, the Mother of the Believers, may Allah be pleased with her, that she said, "The Prophet

was performing I‘tikaaf and I came to visit him. I talked to him for a while and then I got up to go back (to my home) and he got up with me…." [Al-Bukhari & Muslim]

You are permitted to go out of the mosque when there is a necessity, such as answering the call of nature, bringing food and drink if there is no one to bring this for you, seeking treatment if you get sick while observing I‘tikaaf and going to the aid of a sick person from your family whom you are obliged to care for when there is no one to do this other than you.

However, going out of the mosque for something that opposes I‘tikaaf, such as selling or buying, having sexual intercourse with one’s wife or touching her (i.e. foreplay), and so on, violates I‘tikaaf.

Dear observer of I‘tikaaf, if you have company then choose a companion who helps you to obey Allah, strengthens your morale and is keen to spend his time in goodness and worship. Avoid those who waste their time in vain talk. Some observers of I‘tikaaf show diligence during the first few days and then feel slack and lazy and spend their time in useless conversations which may even lead them to engage in unlawful talk, such as backbiting!

Dear Muslim, while performing I‘tikaaf is a recommended act of worship, maintaining your home and children is an obligation. So beware of neglecting to take care of your family, for that is more important. You should try to perform the two tasks at the same time. Be keen to the utmost to guard your family members against temptations. Do not make I‘tikaaf a cause for neglecting the due rights of others. It is better, if possible, to take your sons to perform I‘tikaaf along with you, for this acts as a method of nurturing, makes you feel comfort, boosts affection and love between you and trains them to worship. If this is difficult for them, then they should at least observe one night of I‘tikaaf along with you. You should reward them abundantly and encourage them to do so.

Dear Muslim, the seasons of obedience are stations from which the traveler seeks provision on his way to a garden whose width is like the distance between the heavens and the earth. You should be one of those who are wise and discerning and thus do not miss such opportunities and stations without obtaining the gifts of Allah and winning the great reward.

Be keen to perform I‘tikaaf with a truthful and sincere intention. Avoid showing off, hypocrisy, love of praise and conceit. Dedicate all your righteous deeds for the sake of Allah The Almighty. Allah Says (what means): {And they were not commanded except to worship Allah, [being] sincere to Him in religion, inclining to truth…} [Quran 98: 5]

In a famous Hadeeth, the Prophet

said: "Deeds are judged based upon the intentions, and for everyone what he has intended…" [Al-Bukhari & Muslim]

Choosing a mosque where no one knows you and where you know no one helps you to achieve sincerity. You have no need to openly tell about your I‘tikaaf on ‘Eed day or afterwards.

May Allah make worship a source of pleasure for you and include you among the successful servants who are accepted by Him. May he forgive our sins as well as the sins of our parents and those of all the Muslims. May He exalt the mention of Prophet Muhammad his family and Companions.