I'tikaaf and the Positive Leap 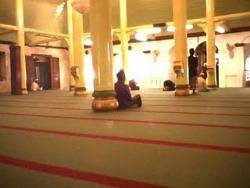 It is narrated on the authority of Abu Hurayrah, may Allah be pleased with him, that he said, “The Prophet

(may Allah exalt his mention), would observe I‘tikaaf every year (during Ramadan) for ten days; in the year in which he passed away, he observed I‘tikaaf for twenty days.” [Al-Bukhari]

The Messenger of this Muslim Ummah (nation)

was keen on this act of worship, leaving for those who follow his guidance a lesson about the importance of devotion to Allah The Almighty and liberation from all worldly occupations and responsibilities, regardless of one’s position in Da‘wah (Islamic propagation), knowledge, education, Jihaad and so on.

According to the author of Ath-Thilaal

“Any soul that is intended to have influence on the reality of human life and thus changing its very course should have times at which to stay in seclusion and segregation … involvement in the reality of life causes the soul to become familiar with and submissive to it, and makes no effort to change it. But separation and isolation from it for some time, and living free from the captivity of this tiny reality and trivial occupations qualify the great soul to see what is greater, and train it to feel self-integration with no need for the people's customs.” [Fi Thilaal Al-Quran, Sayyid Qutb]

This act of worship can be seen to achieve many important things, including:

1. To redress any shortcoming and make up for any deficiency one may have in his relationship with Allah The Almighty as a result of occupation by Da‘wah, knowledge and other matters, or, more preferably, engagement in such worldly affairs as the wife, children, job, and so on.

2. To intensify the fiducial relationship with Allah and open more gateways of worship which purify the soul and qualify it to confront tribulations and deliver others from them, by the permission of Allah.

3. I‘tikaaf is a great opportunity to seek after deeds - especially on the part of those whom engagement with acquisition and learning keeps them from much application and practice. It is not accepted by rational people that somebody should teach others what would save them and then leave doing it himself. The Messenger of Allah

said: “The similitude of he who teaches good to the people and then forgets himself is like a wick that lights up for the people and burns itself.” [Al-Albaani: Saheeh (Authentic)]

4. I‘tikaaf is a great season for the callers to Allah and educators to make up for the shortage that afflicts them because of their occupation with the people, and to avail themselves of the opportunity to promote the fiducial and ritual level of those involved in Da‘wah and education. We suffer from public weakness in terms of ambition among the righteous concerning the ritual and behavioral aspects in comparison to what is required and intended to reform and promote the society to be like that of the righteous predecessors. For this reason, we need to avail ourselves of the season of Ramadan in general and the act of I‘tikaaf in particular to improve this general state through addressing individuals.

5. It is a great opportunity to test sheer sincerity to Allah The Almighty in all acts, movements and stillness. This point goes beyond the individual perspective. Sincerity is the rationale for accepting all deeds which correspond to the Sharee‘ah; and this includes all things pertaining to Da‘wah and education. It is a great shame and a huge loss to spend much wealth and exert much effort and then fail to achieve the goals required under the Sharee‘ah simply because the workers lack sincerity. Moreover sincerity is something that is itself at risk within the community, and this something well-known.

6. I‘tikaaf is a great opportunity for intellectual seclusion by which a caller to Allah could judge his course of Da‘wah and assess his achievements: Does he still proceed according to what is planned toward the specific goal, or has he deviated from it? In case of deviation, what is the degree of deviation? Does he need to modify the course of action or reconsider and reformulate the goal? The period of spiritual seclusion in I‘tikaaf is essential to intellectual segregation, where the soul is likely stripped of self-interest and approaches the idealism that transcends everyday habits. As I‘tikaaf is a station of stop from work, it is easy to resume work after it in a new and safer form.

7. It is also a fine occasion to surmount the highly sensitive problem of molding the educated within the limits of the educator’s mould. As bitter as this might be, it is a very dangerous reality as some educational incubators produce individuals who seem to be exact replicas of their educators. The Messenger of Allah

used to educate people to be leaders rather than slaves. Who could forget these educators who produced for the Ummah the leading scholars of the juristic schools, Tafseer (Quranic exegesis), Hadeeth, history, Jihaad and other subjects?

I‘tikaaf is a good occasion for the educated to go on with no restrictions in the different gateways of worship, polish the personality, direct the concerns, and exceed the stereotyped thinking toward building disciplined independence.

It is sufficient for us in this brief article to draw attention to this issue.

We should also refer to the fact that the I‘tikaaf required to achieve the previously mentioned goals and others is not that which makes the mosques places for people to sleep, or assemblies of visitors, or tables of food, or gatherings for striking acquaintances and useless speech. The required I‘tikaaf is that which moves the individual to imitate the life of the righteous predecessors in everything. It is the I‘tikaaf in which the tears of the thoughtfully submissive flow, the hands of the devout supplicant are raised, and where one seeks to waste not a single moment in anything other than worship. It is the I‘tikaaf which realizes the concept of self-education to imitate the doers of good. It is that which is utilized to attain the highest degree according to which one persists in remembrance and mentioning of Allah The Almighty, goes through the Book of Allah with recitation, reflection and Tafseer, reaches the highest rank by maintaining the prayers submissively at their due time as early as possible, and standing (in prayer) at night gladly and fearfully. It is the I‘tikaaf which liberates man from many negative characteristics, makes him become too wise to talk uselessly, or act jokingly, or mix with others in a way that limits his ambition to those of his companions. It is the I‘tikaaf which nurtures the soul to abstain from varieties of foods and drinks, thus leading to tender-heartedness, self-mortification and liberation from the slavery to whims, laziness and sluggishness. Ibn Al-Qayyim

said, “If the star of ambition rises amidst the dark night of idleness, followed by the moon of determination, the earth of the heart will shine with the light of its Lord.” [Sayd Al-Fawaa’id, Ibn Al-Qayyim]

So, let us make I‘tikaaf a good occasion to achieve the required positive leap, and beware of seeking after the impossible perfections which only cause a relapse of ambition and a departure from goodness.