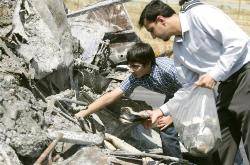 On Thursday, a Palestinian American was visiting his father's grave at Muslim cemetery in Evergreen Park, a suburb southwest of Chicago, when he noticed graffiti written on the tombstones.

Anti-Muslim graffiti were written on the tombs in what cannot be seen as an isolated attack against Muslim sites in the US. In the two weeks before the graffiti was discovered, seven Islamic centers - from California to Rhode Island - have been attacked.

In one of the attacks, a mosque in Joplin, Missouri, was burned to the ground. It was the second attempt to destroy the mosque after an unsuccessful attempt by arsonists one month earlier.

With the end of the month of Ramadan and the fast-approaching Eid holiday, many US Muslims are asking why the media and their elected politicians are not doing more to highlight the attacks on their community.

The community, however, has received a different kind of attention as of late. And it's not one they’re happy about.

"One of the committees I sit on is homeland security," said US Representative Joe Walsh, offering his credentials to a packed town hall event in the Chicago suburb of Elk Grove, on August 8.

"I'm not sure of a lot of things, but one thing I am sure of is that there are people in this country, there is a radical strain of Islam in this country - it's not just over there - trying to kill Americans every week," he told the crowd. It was filmed and posted to YouTube.

"And it is a threat that is much more at home now then it was right after 9/11. It's here, it's in Elk Grove, it's in Addison, it's in Elgin,” Walsh said referring to neighboring Chicago suburbs.

Sonia Hassan, a 39-year-old Egyptian American - and an Elk Grove resident for most of her life - was furious when she heard about the event a day later.

"I wish I had been there," she told Al Jazeera. "I would've stood up and said: 'You are saying stuff that can affect my family and my community in a negative way.'"

Hassan told Al Jazeera that her parents, immigrants from Egypt who moved to Elk Grove in the mid-1970s, were the first Arabs or Muslims in the area.

She described an incident a few years ago when a neighbor from across the street approached her mother and shouted one word, "terrorist", before returning to her home.

And earlier this summer, Hassan said that a car full of men threw water balloons at her family's home. She suspects it wasn't a random act because of what she called "racist howls" from the men.

Ahmed Rehab, the executive director of the Chicago chapter of the Council on American-Islamic Relations, told Al Jazeera that, while politicians such as Walsh and others weren't telling people to go out and wage attacks against Muslims, the things they're saying are clearly having an effect.

"We're not necessarily seeing a cause and effect relationship … but we are seeing correlation between the rise in Islamophobic rhetoric and the violent crime on houses of worship, schools and other Muslim targets," Rehab said.

In the days following Walsh's comments, an Islamic school in the town of Lombard was hit with a bottle of acid, and a man fired a rifle at a mosque in Morton Grove while 500 worshippers were praying inside. Both suburban towns are fewer than 15 miles from the Congressman's town hall event.

"Unless you give actual information, what you're doing is suggesting to people that it could be your neighbor in hijab that I'm talking about, or the guy at the gas station with the beard," Rehab said.

For Rehab, the rise in attacks could be attributed to the fact that this is an election year. And ever since the attacks on the World Trade Centre, CAIR has documented a steady increase in "Islamophobic rhetoric" during election seasons.

Rehab said this was politicians exploiting an underlying fear that some people have of Muslim Americans, in order to score "political points".
Before Mitt Romney effectively secured his party's nomination to face off against Barack Obama in November's presidential election, other Republican candidates such as Michelle Bachmann, Rick Santorum and Newt Gingrich had all warned about the threat the United States faced from "radical Islam".

"[Politicians] believe they can make themselves out to be the heroes that know how protect this country from the Muslims," Rehab said. "And in order to sell that narrative, you have to demonize Muslims."

Walsh, whose office did not respond to Al Jazeera's request for comment about his statements and the spate of attacks on Muslim sites, did release a video in response to the Elk Grove event.

In the video, Walsh did not condemn any of the attacks on Islamic centers - or even mention them. Instead, he issued a stern warning: "Let me be clear: bowing to political correctness has and will get Americans killed."

"We must always speak the truth to this threat, no matter how politically incorrect," Walsh said.

Meanwhile, for observers such as Hassan, who would normally be excited for this weekend's Eid holiday, that "truth" has created a sense of worry and fear - as many of the nation's nearly three million Muslims will be gathering to worship at religious centers across the country.

"Eid is Sunday, and it's messed up that these hate crimes are happening around this time," Hassan said. "It's making people scared to go pray. They think something is going to happen."

"Why is our holy month being tainted and it's OK? Would it be OK if this was happening during any other religion's holiday?"