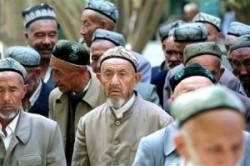 The Muslim Hui are an anomaly in China, an ethnic minority granted significant autonomy and allowed to devoutly follow their religion in a region where Islam thrives.

The ancient Silk Road trade route cut through what is today the Ningxia Hui Autonomous Region, luring Muslim traders from afar. Descendants of Arab and Persian merchants travelled here in the 7th century and many settled, planting the roots of Islam in the heart of China.

About half the country’s 20 million Muslims are from the Hui ethnic group.

Muslims were persecuted in Ningxia during Mao Zedong’s Cultural Revolution in the 1960s and ‘70s, but today Islam flourishes. More than 400 mosques dot the region, and Islamic schools have produced some 7,000 imams - or Islamic clerics known locally as ahongs.

While Muslim Uighurs of Turkic descent in the far west face harsh religious restrictions and repression, the Hui have been afforded much more political and religious freedom by Beijing. Observers say it is their friendly historical relations with the ethnic majority Han that is the difference.

“The different cultures have merged in this place harmoniously,” says Ma Zhang Wen, the imam of Xinhua Mosque.

Ma, 38, has been an imam for the last 15 years in Yinchuan, Ningxia’s capital, about 1,300 kilometers northwest of Beijing.

“The government gives people a religion-training program to develop Islam. The Han respect us, and we respect them, too,” Ma says.

According to official data, there are 6.3 million people in Ningxia, and 2.2 million are Hui.

The impoverished region faced hard times but has seen a revival in recent years. Islam has helped rejuvenate the economy, and Ningxia has developed economic ties to Arab and Muslim countries.

Ningxia's halal food industry, for example, is worth about $700m a year, according to government statistics.

“Peoples’ lives in Ningxia are getting better and better. We don’t feel discrimination or inequality,” says the imam Ma.

The government’s move to nurture the region’s economic growth has helped. “The western development policy encourages us to develop the economy, and we have witnessed a dramatic change,” he says.

Bao Hongbiao, a researcher at the Ningxia Academy of Social Sciences, says gearing products toward Islamic markets has paid off for Ningxia’s Muslim community.

“Muslim food and religious goods are showing fast growth, providing products to other provinces and exporting them to Central Asia and other Muslim regions,” says Bao.
Muslim Uighur repression

While Hui Muslims enjoy freedom to practice their religion, Muslim Uighurs face strict government repression in far-western Xinjiang province. Bao says while the Hui have happily assimilated with the majority Han, the Uighurs have not.

Part of the problem is language differences. While the Hui and Han both speak Mandarin, the Uighurs speak their own Turkic dialect and write in Arabic script.

Others say the Uighurs’ strong desire for autonomy explains the difference in treatment.

But others highlight the government’s policy of offering incentives for Han Chinese to migrate west as a main cause of friction.

Alim Seytoff, president of the Uyghur American Association, says the government routinely blocks Uighurs from practicing Islam.The Han population in Xinjiang has skyrocketed from 6.7 per cent in 1949 to 40 per cent in 2008, fueling ethnic tensions over resources and jobs.

“It is meant as a message to the Uighur people telling them to abandon their faith or face charges of extremism, even for simple expressions of religious belief. All these measures do is further alienate Uighurs, if that is possible,” says Seytoff.

In July 2009 riots erupted in Xinjiang's regional capital Urumqi, leaving about 200 Uighurs and Han dead. China’s government cracked down - a situation that continues to simmer to this day.
While Beijing supports the Muslim religion in Ningxia, that is far from the case in Xinjiang. Minors under the age of 18 are forbidden from participating in Islamic practices, and thousands are detained every year for "illegal religious activity", according to a report by Human Right Watch.

It is strictly prohibited to celebrate religious holidays and study religious texts at state institutions, including schools, said the 2005 report titled “Devastating Blows: Religious Repression of Uighurs in Xinjiang”.
“For Beijing, Xinjiang falls into the same broad category of political concerns as Taiwan and Tibet,” the report says. “Demands for separation and/or autonomy are seen in Beijing as a threat to the continued viability of the Chinese state.”

During Ramadan, the Islamic blessed month, notices were posted banning or discouraging fasting by Communist Party members, civil servants, students and teachers.
"Religious extremism is closely related to violence and terrorism, and cracking down on these is one of our top priorities," spokeswoman Hou Hanmin was quoted as saying in the state-run Global Times newspaper. A regional government spokeswoman denied that fasting was banned, saying the notices only encouraged people to “eat properly for study and work”.

Amnesty International researcher Corinna-Barbara Francis says the situation continues to deteriorate “very badly” in Xinjiang.
“There is a much tighter level of control for all Uighurs, and the religious repression has intensified,” she says.

A file photo of Muslim Uighur men emerging from the Id Kah mosque after prayers, in Kashgar, in China’s western Xinjiang province Friday.