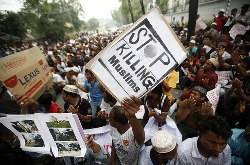 When 27-year-old Najumul Haq took to sea for the first time, he left behind all that he had ever known.

Najumul is a Rohingya, born in Myanmar. For years, his family had run a sundry shop in the town of Maungdaw, on the country's western coast close to the border with Bangladesh.

Travelling first to nearby Bangladesh, and then to a rendezvous with a boat carrying more than 230 other people, it took Najumul nearly a month to get to Malaysia. He and his family paid the brokers who control the escape routes nearly $2,200.

"As soon as I got on board, the brokers took away my money and my phone … anything valuable," he told Al Jazeera in Kuala Lumpur. "All we had to eat was dried noodles, and if we moved the broker would beat us." The only shelter from the rain and choppy seas was a tarpaulin.

Najumul arrived in Malaysia two weeks ago, just as another outbreak of Buddhist verses Muslim Rohingya violence in his homeland began. More than 150 people have been killed since June.

Rohingya on the margins

Najumul joined tens of thousands of Rohingya who've made their homes in Malaysia in the past few decades, eking out a living on the margins of society, unable to get a proper job or give their children an education because they don't have legal status in the country.

Like many of Myanmar's immediate neighbors, Malaysia hasn't signed the UN Convention on Refugees. That means that those who arrive in the country are, as far as the government is concerned, illegal migrants.

"Malaysia has no law to protect refugees," said Chris Lewa, a director of the Bangkok-based Arakan Project, who's been working on Rohingya issues for more than a decade. "They allow the UNHCR [United Nations High Commission for Refugees] to register people, but that's only an informal protection."

The UNHCR says there are 24,370 Rohingya registered in Malaysia, but the numbers actually living in the country are much higher. At a recent "data registration exercise" in Kuala Lumpur, thousands of unregistered Rohingya, Myanmar Muslims and Myanmar Tamils queued to give their details to the agency officials. While some were recent arrivals, many had been in Malaysia for years.

Ajim, who goes by one name, arrived in Malaysia two months ago after his community of fishermen decided to use one of their boats to escape the violence. Activists in Myanmar say government policy has helped fuel ethnic tension, but even in the safety of Malaysia, 18-year-old Ajim feels little sense of security.

"I don't see any future here in Malaysia," he told Al Jazeera at a community centre run by other Rohingya refugees.

"I have no documents and without documents it's very difficult to get a job. It's hopeless."

Most Rohingya find work through community networks - Nujumul works in a small shop catering to other Myanmar migrants - or take poorly paid jobs that have little appeal to others.

Schooling is more difficult. The Tzu Chi Buddhist Foundation in partnership with the UNHCR runs seven schools for migrants from Myanmar, including three specifically for Rohingya.

The children, aged 6-11, don’t follow a full curriculum but do get lessons in English, Malay, maths and science.

Their parents pay about $1 a month for classes. They’re eager to learn and, like many children, have ambitions for the future.

Umairah Begum, 11, left Sittwe - capital of Myanmar’s western Rakhine state - for Malaysia three years ago. She says she loves going to school and dreams of becoming a doctor. "I want to save people’s lives," Umairah says in fluent Malay that’s she’s picked up.

The former UN special envoy to Myanmar, Malaysian diplomat Razali Ismail, has called on the Malaysian government to make life "easier" for the Rohingya in Malaysia.

It seems officials may be listening. In the past week, key agencies have met to discuss Rohingyas’ access to education. Jobs may also be on the agenda.

"Whatever happens to them is going to affect this country," Nazri Aziz of the Prime Minister’s Department told Al Jazeera. "If we don’t take action to help them, we’re going to create a group of people in society who may be considered as laggards. They’re going nowhere, they’re going to be here."

Official estimates put the number of people displaced in this year’s ethnic violence in Rakhine at more than 110,000 people. Some 36,400 people were forced from the homes in October, many of them into squalid camps. Hundreds of thousands more are in Bangladesh. Activists expect that as the weather improves in the Bay of Bengal, more Rohingya may be tempted to make the trip to Malaysia.

Diplomatic efforts to find a solution to the ethnic violence in Myanmar have made little progress. Former Malaysian Prime Minister Mahathir Mohamad has called on the country’s now quasi-democratic leaders to grant the Rohingya citizenship.

Worried the situation could radicalize Rohingya and create tension throughout the region, Association of Southeast Asian Nations Secretary-General Surin Pitsuwan has offered ASEAN’s help, but Myanmar rejected the offer, insisting the dispute is a domestic issue. Despite recent reforms, not everyone’s surprised.

"I don’t think the junta is particularly interested in anything that ASEAN has to say," said Joshua Snider, assistant professor at the School of Politics, History & International Relations at the University of Nottingham Malaysia.

"I think they are playing their own game. Now that Myanmar is no longer a pariah, the question is whether the international community is willing to put its foot down and say that all the aid that’s pouring in could be withdrawn unless something is done."

For now, the Rohingya in Malaysia see little chance that international action will give them the chance to return home, or an opportunity to settle permanently elsewhere. They will continue to spend their days worrying about the future, but mostly about those they’ve left behind.

The tears well up in Nujumul’s eyes as he recounts his last conversation with his family.

Ethnic Rohingya from Myanmar living in Malaysia hold placards calling for a stop to killings in June.