The Key to Paradise 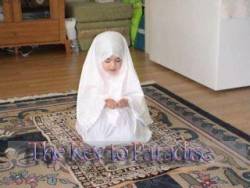 Imagine: There is a path to Paradise and as we move along the path, with the very first step we find a huge signboard on which the following is written: "Hijab…the key to Paradise." Naturally, in order to gain entry to Paradise, we have to know the merits and characteristics of Hijab (Islamic covering).

Allah The Almighty Says (what means): {O children of Adam, We have bestowed upon you clothing to conceal your private parts and as adornment. But the clothing of righteousness - that is best. That is from the signs of Allah that perhaps they will remember.} [Quran 7:26]

Allah The Almighty Says (what means): {And when you ask [his wives] for something, ask them from behind a partition. That is purer for your hearts and their hearts.} [Quran 33:53] It was narrated on the authority of ‘Aa’ishah

said, "O Messenger of Allah, when righteous and dissolute men [both] may enter upon your wives, it would be better to order them to be veiled." On this occasion, the verse of Hijab was revealed, {And when you ask [his wives] for something, ask them from behind a partition. That is purer for your hearts and their hearts.} [Quran 33:53] This verse proves that Hijab is a barrier between the desires of the souls and temptation of the hearts. It cuts the aspirations of those who have diseased hearts. So, Allah The Almighty Says (what means): {Then do not be soft in speech [to men], lest he in whose heart is disease should covet.} [Quran 33:32]

said: "Bashfulness is part of faith, and faith leads to Paradise." [At-Tirmithi] [Al-Albani: Saheeh] There is no doubt that Hijab makes the woman realize her value in Islam and encourages her not to do anything against the obligations of Islamic ethics and appearance.

Therefore, Hijab leads the woman gradually to developing bashfulness which itself requires her to wear Hijab. In this way, every act of worship leads the Muslim to another one. Our Mother ‘Aa’ishah

I used to enter the house where the Prophet

and my father were buried putting aside my garment, saying that it is [only] my husband and father. When ‘Umar

was buried there, I never entered except wearing my garment out of shyness of ‘Umar

. [Ahmad] [Al-Hakim: Saheeh according to the conditions stipulated by Al-Bukhari and Muslim]

Hijab is a call to Sitr (covering and protection)

said: "Any woman who takes off her clothes anywhere other than her husband's house violates the Sitr (concealment and protection) bestowed on her by Allah The Almighty." [Ahmad] [Al-Albani: Saheeh] The woman who observes her Hijab has attained covering from Allah The Almighty in this life and in the Hereafter and she will be among the dwellers of Paradise which is the abode of covering.

Hijab is a Part of Fitrah

Hijab and covering are part of the Fitrah (innate disposition) of the woman. She, by nature, does not like anyone to look at her. Sometimes a bashful Muslim woman may feel shy of her husband whom Allah The Almighty made lawful for her. Man's innate disposition calls him to cover, whereas an animal's nature tends to nudity.

Hijab is an act of worship

Hijab is an act of worship offered to Allah The Almighty since He is the One who ordered the woman to wear it. Allah The Almighty Says (what means): {And to wrap [a portion of] their head-covers over their chests.} [Quran 24:31] The Muslim woman, who submits to the commands of Allah The Almighty, is the one whose heart is filled with love for Allah The Almighty. The issue of Hijab is not irrelevant to the Sharee‘ah (Islamic legislation) of Allah and His laws in the universe; rather, it is an issue that is firmly connected with the creed and Sharee‘ah at the same time.

Hijab takes you to a good end

One of the righteous predecessors said, "If you want to know your position in the sight of Allah, see where He has placed you." If Allah has placed the Muslim woman in obedience and wearing Hijab, this would be her ultimate status in His sight. The Prophet

said: "‘When Allah wants to do good for one of his slaves, He utilizes him.” People asked, “How does Allah utilize him?” He replied: “He guides him to do a righteous deed before he dies, then takes away his soul while performing it." [At-Tirmithi] [Al-Albani: Saheeh] Thus, if Allah The Almighty guides you, O pure sister, to wear Hijab until the last moment of your life, He would be utilizing you, and you should prostrate in gratitude to Allah The Almighty.

said: "There are two groups of people who will enter Hell but I have not seen them. One of them is a woman who is dressed but appears to be naked." [Muslim] A woman who wears Hijab keeps herself away from the punishment of Allah The Almighty.

Hijab is the symbol of the Muslim woman

reported that dissolute men used to annoy and abuse women when they went out at night. If they found a woman wearing Hijab, they would leave her and say that she is a free woman; if they found her without Hijab, they would say that she is a bondmaid and would harm her. On this occasion, Allah The Almighty Revealed (what means): {O Prophet, tell your wives and your daughters and the women of the believers to bring down over themselves [part] of their outer garments. That is more suitable that they will be known and not be abused. And ever is Allah Forgiving and Merciful.} [Quran 33:59]

Allah The Almighty addressed older women, whom men no longer desire, Saying (what means): {And women of post-menstrual age who have no desire for marriage -- there is no blame upon them for putting aside their outer garments [but] not displaying adornment. But to modestly refrain [from that] is better for them. And Allah is Hearing and Knowing.} [Quran 24:60] It means that there is no blame or sin upon them to put aside some of their clothes, such as the upper garment and Jilbab (garment worn over the clothes when going out), and appear before men with their usual clothes that do not attract attention or arouse sexual desires. So, the condition is that "{…not displaying adornment}" for men to look at. After that Allah The Almighty Says (what means): {But to modestly refrain [from that] is better for them}" meaning that covering themselves by wearing the Jilbab and the clothes of young women seeking comprehensive covering and chastity would be better for them, and more honorable and purer in the sight of Allah The Almighty.

Hijab is an address to every believing woman

This shows that this address is directed to a sincere believing woman whose heart has been touched by faith and who submits to the command of Allah The Almighty.