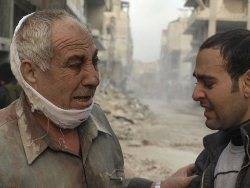 Water-borne diseases are spreading in Syria, compounding the problems of hospitals that are perilously short of medicine and doctors after nearly two years of fighting, the World Health Organization says.

The country's health ministry has run out of trauma treatments made in factories in opposition areas to help the increasing numbers of burn victims and wounded civilians in intensive care units, it said on Tuesday.

That is assuming patients can reach treatment in the first place. Many surgeons have fled, hospitals are closed and most ambulances are either damaged or are being used by both sides as a clandestine way to transport fighters, the WHO said.

"The biggest concern for us is the breakdown of the water and sanitation system and the increasing numbers of water-borne diseases," WHO representative Elisabeth Hoff told a news briefing about the deteriorating health situation on the ground on Tuesday.

Hepatitis A, a viral liver disease that can cause explosive epidemics, has been reported in Aleppo and Idlib - where there has been intense fighting - and some crowded shelters for the homeless in the capital, she said by telephone from Damascus.

Aid groups have had to start using alternatives to purify water because the import of chlorine gas has been banned over fears it could be misused as a chemical weapon.

Heavy fighting between the forces of President Bashar al-Assad and opposition forces could swell the ranks of the four million who already need urgent assistance in Syria and two million internally displaced in the past two years.

"The catastrophic humanitarian crisis continues to deepen," Jens Laerke, spokesman of the UN Office for the Coordination of Humanitarian Affairs (OCHA), told the briefing.

"We are operating mostly out of government-controlled areas, that doesn't mean we don't deliver in opposition-controlled areas. Frontlines are changing, it is fluid situation," he said.

Hoff said she could see black smoke from every corner of Damascus. "Rural Damascus, with four million people, is now heavily embroiled in the conflict," she said.

She said she had visited a burns hospital in the capital which receives patients from all over the country.

"These explosions are taking place and hitting into highly populated areas. You see a number of children and women with serious burns," she said.

However, Hoff said the government could not access a factory in Aleppo that produces serum to help such trauma patients, because the road is controlled by the opposition. The health ministry has requested 150,000 units of serum from the WHO.

"The factory has the serum which is needed for operations, for trauma and for injured, but they cannot access it because three kilometers of the road between the factory and the city is totally controlled by the opposition," Hoff said.

Syrian military planes carrying doses of vaccine against measles and polio were shot at last week in Aleppo, she said.

"So we are now trying to see how we can set up a convoy and negotiate also with the opposition to try to get this in, not only to the public hospitals but also to the non-governmental organizations," she said.

More than half of Syria's public hospitals have been damaged and more than a third of them are out of service, Hoff said.

Most of the surgeons in Homs have left the embattled province.

"The problem is that many surgeons are leaving many of the heavily affected governorates. Because some patients don't seek treatment because of the security forces in the hospital, they actually go to the homes of some of the surgeons and this led to unfortunate incidents happening to these surgeons," she said.

Some 78 percent of Syria's ambulances are damaged, and more than half of them are not functional, according to the WHO.

But as both sides are misusing ambulances to transport fighters, the UN agency can no longer supply new vehicles, Hoff said.

"Women particularly come to hospitals, asking doctors for medicines, broad-spectrum antibiotics and bandages, this is giving a clear signal that patients are being looked after in their homes," she said.