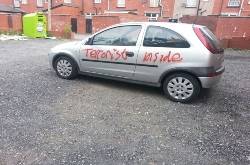 The murder of a UK soldier has led to a spike in hate crimes targeting Muslims.

British Muslims fear they could become “sitting targets” for far-right violence following a spate of attacks on mosques and a spike in other reported hate incidents in the week since the murder of a British soldier on a London street.

The most serious attack occurred in the east coast town of Grimsby on Sunday night when three petrol bombs were thrown at a mosque as a meeting was taking place inside.

Other attacks were reported on mosques in the southern towns of Braintree and Gillingham within hours of last Wednesday's killing.

Elsewhere, a petrol bomb was thrown at a mosque in Milton Keynes, bacon was left on the steps of a mosque in the Welsh capital Cardiff, and there were reports of vandalism at Islamic centers elsewhere.

Meanwhile, about 1,000 supporters of the far-right English Defense League rallied in central London on Monday chanting “Muslim killers off our streets” and heard Tommy Robinson, the EDL's leader, call for further demonstrations.

“They've had their Arab Spring. This is time for the English Spring,” said Robinson, whose group also saw its number of Facebook followers surge from 20,000 to more than 100,000.

Tell MAMA (Monitoring Anti-Muslim Attacks), a helpline set up to monitor instances of Islamophobia, said it had recorded 193 incidents since last Wednesday, compared to a usual tally of about four cases a day.

“There is a background Islamophobia that is always rumbling,” Fiyaz Mughal, a director of the Faith Matters interfaith group that runs Tell MAMA, told Al Jazeera. “But if we take the latest figures, we are looking at about 40 cases a day and a ten-fold jump all of a sudden.”

Salim Bhorat, a community activist in Bolton, a town in northwestern England with a large Muslim minority, said one mosque had been vandalized with spray paint, dog excrement had been thrown at another, and a woman had been attacked in the street. A car outside the mosque was also daubed with the words “Terrorist inside”.

He said the killing of soldier Lee Rigby appeared to have reawakened the EDL in the area even as its influence appeared to be waning amid group infighting.

“Nothing like this has happened in Bolton for a long time, so these attacks are a direct response to Woolwich and the mass hysteria afterwards,” Bhorat told Al Jazeera. “We've always had the EDL in Bolton and this has given them an excuse to rally their weary troops.”

Bhorat said many local Muslims were nervous because unfounded rumors of attacks were spreading quickly via social networking and text messaging. “There has been a lot of scaremongering. People forward on messages without verifying them and that just creates a false sense of fear in the community.”

Sikander Sleemy, the secretary of a mosque attacked in the Essex town of Braintree, told Al Jazeera that a smoke grenade was thrown into the building last Wednesday evening by a man armed with two knives.

“We were very fortunate because the prayer time was only 15 minutes away but there was only one person in the mosque. He was upstairs when he heard the bang and smelt the smoke and he could hear someone shouting and swearing downstairs, but he managed to escape onto the roof,” he said.

These attacks and incidents are happening in areas where Muslims are the majority as well as the minority.

Fiyaz Mughal, a director of Faith Matters, Sleemy said Braintree's small local Muslim community had never experienced any problems before. “We do feel part and parcel of the community and my personal feeling is that this was just an isolated rage attack. But if idiots like those guys in Woolwich, if there are any more attacks like that, God forbid that there are, then we are afraid that we will become sitting targets.”

Amid shock and condemnation, Justin Welby, the Archbishop of Canterbury and head of the Church of England, visited Leicester last week in a show of interfaith solidarity with Muslim leaders, praising the diverse city, where just under a fifth of residents are Muslim, as a “a shining example of how communities work together”.

Suleman Nagdi, a local Muslim civic leader, told Al Jazeera he believed the city's Muslim community was well established and confident enough to face down any threats against it. “Leicester has mature relations between members of the different faith communities. We have a situation up and down the country that is concerning to us but we built those bridges many, many years ago,” he said.

But Mughal questioned the assumption that Muslims in cities such as Leicester were better protected than those in areas with smaller and less established Muslim populations.

“The fact of the matter is these attacks and incidents are happening in areas where Muslims are the majority as well as the minority. In Leicester we had a cluster of incidents last year. It's quite a hot spot because there is a concentration of far-right supporters in the area around the city.”

Mughal said far-right activists were increasingly using the internet not just for recruitment and dissemination purposes but also to attack Muslims online. “If you get a woman whose avatar has a hijab they will bombard here with sexual abuse to humiliate here. That is the kind of activity we are seeing.”

He also cited concerns about social networking sites and new guidelines for police which have raised the threshold in terms of what is considered prosecutable as hate speech online. “Our biggest issue is constantly having thousands of tweets out there that are just promoting deeply anti-Islamic feeling. We've never had that before,” he said.

Others raised frustrations about the mainstream media's coverage of the Woolwich attack, including the labeling of the perpetrators as “Islamic terrorists”. Nick Robinson, the BBC's political editor, apologized later that day after quoting a source who described the attackers as being “of Muslim appearance”.

“We are the only community, in the UK certainly, which whenever an act of terrorism has taken place, the whole community is put in the dock for the criminal activities of individuals,” said Nagdi. “Acts of terrorism affect us all but it does seems odd that when it is a Muslim you always expect Muslims to condemn it. We do condemn it but there is a history of bias in the reporting mechanism that it is expected.”

Sleemy also condemned the airtime given to Anjem Choudary, a radical cleric formerly of the banned al Muhajiroun group, on the BBC's flagship Newsnight program.
“He is not the voice of Muslims. He is a very extreme fringe group, and if people are watching that and they've got very little knowledge they are building a picture of a Muslim that he has portrayed,” he said.

Mughal said positive media coverage of Muslim communities would help address Islamophobia but added that tougher police action was urgently needed.
“The police have failed miserably dealing with some cases we've put through to them. They need to understand Islamophobia as a phenomenon that is deeply corrosive and they need to act quickly.”

He said it was hard to predict for how long the current upsurge of anti-Muslim attacks would continue as no comparable data was available for events such as the 2005 bombings on the London transport network.

But he added: “The fact is these effects are cumulative, and this was such a significant and barbarous attack that it will certainly add to the cumulative effect over time.”

A car outside the mosque daubed with the words “Terrorist inside”.