Ban on Palestinians living with spouses in Israel 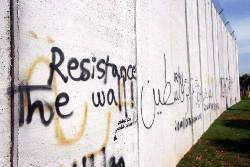 When Israeli Arabs search for a spouse, they don't just worry about looks, job prospects or future in-laws. They must think about whether their partner will be allowed to live with them.

The problem is — many Israeli Arabs, who are ethnically Palestinians, want to marry Palestinians from the West Bank or Gaza Strip. But relations between the Palestinian territories and Israel are testy at best and violent at worst, resulting in limits that even love can't overcome.

For the past decade, Israel has largely restricted Palestinians from joining their spouses inside the Jewish state.

About 1.6 million Arabs are Israeli citizens. About 4.4 million Palestinians live in the West Bank and Gaza. They are linked by ethnic and family ties, but the lines between Israel and Palestinian areas divide them.

There are no official statistics, but thousands of Palestinians are believed to be living ‘illegally’ with their Israeli Arab spouses inside Israel, threatened with deportation.

Israel's Interior Ministry did not say how many have actually been deported, and no one volunteered stories of relatives or acquaintances who had been arrested or expelled.

Still, the perceived threat hanging over them compels the Palestinians in Israel to stay near their homes.

"I'm living on my nerves," said Sahar Kabaha, a 33-year-old Palestinian woman. After her Israeli Arab husband died last year, she was denied the right to remain in the country, even though her four children are Israeli citizens. She now lives without legal papers in the Israeli Arab town of Bartaa. She does not take her children to a doctor, fearing arrest if she's discovered.

"All I want is permission to be with my children. They don't have anybody else to care for them," Kabaha said.

Critics argue the restrictions discriminate against Israel's Arab citizens. Israeli Jews marrying fellow Jews living in West Bank settlements do not face such restrictions. Critics say it also discriminates against Palestinians, since foreign spouses of Israelis are eligible for citizenship.

Israel "sees Palestinians and Arabs as forming a threat to Israel's security without an individual check, or any ability to prove his or her innocence," said attorney Sawsan Zaher of Adalah, a legal organization fighting the restrictions.

According to official Israeli figures, some 130,000 Palestinians acquired Israeli citizenship in the decade before the restrictions took effect. Of them, five were imprisoned for security-related crimes.

Israel's Interior Ministry introduced the restrictions in 2003, saying they were a temporary measure to combat the ‘violent Palestinian uprising’ against Israel in progress at the time.

Israel's parliament has renewed the restrictions each year since. The Supreme Court upheld the measure in 2006 and 2012.
The restrictions have been eased in stages, allowing Palestinian men over 35 and women over 25 from the West Bank to apply for temporary permits to live and work in Israel. Even so, they may not drive, access health care, welfare or apply for citizenship.
Palestinians from Gaza are banned from living in Israel.

Critics say the real aim is preventing Palestinians from obtaining citizenship in a country obsessed with maintaining its Jewish majority.

Government spokesman Mark Regev insisted security was the only reason. "It's too dangerous," he said. "The idea that you could have enemy nationals having blanket residency is a bridge too far."

Few Israeli Arabs want to join spouses in the Palestinian areas, where unemployment is rampant. Israeli law bars its citizens, including Arabs, from living there.

Israeli Arabs continue to bring their spouses home, because many have family relations with Palestinians that predate the Jewish state, particularly in towns like Bartaa that straddle the line with the West Bank. Even so, such marriages are dropping off because of the difficulties involved, residents said.

A Jerusalem taxi driver meets his Palestinian wife from Gaza in neighboring Egypt every few weeks. The couple, both previously divorced, met when the woman came to Jerusalem with an Israeli permit for medical care for her daughter in 2010. They married before she returned to Gaza. Skype sessions bind their long-distance marriage.

An Israeli Arab woman lives illegally in the West Bank city of Ramallah with her 32-year-old husband and daughter. Her husband is too young to apply for a permit to live in Israel, and she risks losing social welfare benefits if Israel discovers she's living in a Palestinian city.

They requested anonymity, worried that identification would affect their ability to obtain future permits.

Palestinian Nujoud Kabaha, 32, a mother of three, married her Israeli Arab relative a decade ago, but obtained permission to live in his hometown of Bartaa only in 2011.

In 2009, in labor with her third child, she said a hospital guard tried to evict her from the maternity ward because she didn't have a permit.

A decade ago, Israeli Arab Rim Badran, 32, of the village of Beir el-Sikkeh married a Palestinian man who worked in her uncle's restaurant. For the first eight years of their marriage, her husband lived without papers in Israel. He rarely left their home, fearing arrest. He began obtaining permits four years ago, after he turned 35.

"He is scarred from the experience," Badran said. "To this day he lives in fear."