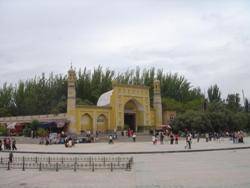 With the increased security measures throughout the region, the central grand bazaar of the capital Urumchi isn't that much lively. Several Muslims in the capital are busy with Ramadan preparations.

Officials said that the security measures were increased more and more every year at the anniversary of the bloody incidents of July 2009 in Urumchi, leaving 197 dead and many more wounded. Before Ramadan, the current security levels have been risen.

Geographically at the heart of Asia, East Turkistan region enfolds several ethnic elements, with Uyghurs comprising the 46.4 pct and Khan nationals 39.3 pct of the region's population. The rest of the population consists of Muslim minorities such as Huis (Chinese Muslims), Kyrgyzs, Kazakhs, Tajiks and Tatars.

After 35 people were killed during last week's incidents in Turpan city, armed security forces are announced to patrol 24 hours throughout the region in Ramadan.