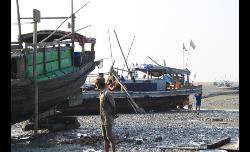 In the dusty Burmese village of Thet Kay Pyin, Rosia sits tending to her elderly, disabled mother on the floor of a dark bamboo hut. Eighty-year-old Feroza cannot feed herself, speak, or even sit up. Without Rosia's care she would be utterly helpless.

The two women, both Rohingya Muslims, live together in Myanmar's western Rakhine state. In the past 18 months, Rosia and her mother have twice had to undergo the stressful ordeal of abandoning their home. In 2012, Buddhist extremists burned their house down during communal violence in Sittwe, the state capital.

Then, last month, after receiving news of an alleged massacre more than 100km north, Rosia said she feared the violence would return and fled to the countryside.

"I heard the Rakhine are coming to attack, and that many people are going to leave. I thought if we didn't come here soon, there would be nowhere left to stay," she said.

At least dozens more like Rosia fled their homes following the reported killings of 48 Muslim men, women and children in the village of Du Chee Yar Tan, Maungdaw township, between January 9-13. Myanmar's government said it had no information about any deaths.

Fear and confusion rapidly spread south to Sittwe after harrowing reports of the incident began to emerge. The exact details of what happened remain unclear, as journalists and aid agencies have been denied access by the government.

Many in Sittwe say they believe violence will now return, mirroring the spread of attacks from Maungdaw to Sittwe that happened in 2012. Some are taking no chances and are leaving their homes to stay in camps or with relatives further away from the Buddhist Rakhine population.

They say they have been scared by rumors that Buddhists are threatening to attack their communities, though Al Jazeera was unable to verify whether any threats took place.
Many of those fleeing have memories of previous violence that are still raw, and the renewed tension following the killings in Du Chee Yar Tan has reawakened their worst fears.

In the downtown district of Aung Mingalar, thousands have been living in intolerable conditions under an apartheid-like system. The rumors have finally convinced some to sell their belongings so they can afford to leave this small patch of land, where Muslims are closed in by checkpoints and are surrounded on all sides by Buddhists.

"We can't sleep well since the violence in Maungdaw," said one resident of Aung Mingalar who asked not to be named for fear of reprisals. "Lots of the people leaving are women, because they heard that in Maungdaw… some people were raped."

It is believed that dozens have fled Aung Mingalar in the last two weeks.

Phil Robertson, deputy director of the Asia division for Human Rights Watch, said Aung Mingalar is "surrounded by hostile Rakhine who have made clear their intention to push the Rohingya out".

"Incidents in other parts of Rakhine state where discriminatory attitudes against the Rohingya boil over in violence and lives lost certainly increase the fears felt by those still besieged in Aung Mingalar."

According to the chairman of Rubber Garden, a camp for internally displaced people, anywhere between 25 and 100 people like Rosia are now arriving every day from around Sittwe.

Kyaw Myint sold his belongings, including his bicycle rickshaw, so he could move his wife and two young children out of Aung Mingalar to the camp. "I heard the Rakhine would attack… I have small children and there's no one to help me," he said.

Gani Ahmed, a teashop owner in Sittwe's Bumay district, sent his two sons to a camp after hearing of threats. "At night time the Rakhine came very close to this area… and they shouted, 'We are coming soon to attack you'", he said.

He added that, since the killings in Maungdaw, business has been slow because others have fled. He has his belongings packed and ready in case he needs to leave quickly.

Security around Aung Mingalar has been stepped up since the Maungdaw killings. And for around three days after the violence, guards frisked every Rohingya who passed through the checkpoint outside Sittwe University, says Aung Win, a local activist.

Sittwe, like other parts of Rakhine state, operates a system of segregation enforced by barbed-wire barricades and armed police that allows Rakhines to move freely, but severely limits the movements of darker-skinned Rohingya Muslims.

In Rubber Garden, new arrivals are putting pressure on the camp's resources, said Noor Mohamed, its chairman. He said that other than a few blankets, the Rakhine state government has not provided any extra support.

In an area near Sittwe airport, about 30 of the 150 families living there have left in the past two weeks, according to Aung Win. Internal migration is common in the region so it is difficult to determine exactly how many are fleeing in fear of more violence.

Shwe Maung, central committee member for the RNDP, the ruling party in Rakhine, denied there had been threats by Buddhists against Rohingya since January 13. He said Muslims may be fleeing their homes because they do not have papers allowing them to stay in the country. The increased level of security in the last two weeks could have made them fear being found out and deported, he said.

The Myanmar government does not acknowledge the Rohingya's right to citizenship, maintaining they are illegal immigrants from Bangladesh, despite the fact that they have been in the country for generations.

The government also continues to strongly deny there were any deaths in Du Chee Yar Tan, but has acknowledged that a clash took place.

Some women and girls have now returned to the village, which had a population of 4,000 before its residents fled, but most men and boys remain in hiding. Human Rights Watch said police have issued a blanket order to arrest any male residents over the age of 10.

One man, who spoke to Al Jazeera by phone on condition of anonymity, said he is hiding nearby. He reported hearing gunshots and seeing men, women and children running from the direction of the noise on the night of January 13. He said on the following day he saw two wounded people in a nearby village.

Late last month a blaze destroyed 16 homes in the village. A Rakhine official claimed Rohingyas may have "burned their own homes". There were no casualties.

The medical charity Medicines Sans Frontiers said last week it had treated at least 22 people who appeared to have been injured in the violence, some with gunshot wounds.
Myanmar's government has been under intensifying international pressure to investigate and to allow aid agencies to move freely in the area.

The stateless Rohingya have faced decades of persecution, but their suffering has intensified since a fresh wave of communal violence started under President Thein Sein's reformist government.

With little hope of a political solution in sight, Rosia is just happy to enjoy the relative stability of Thet Kay Pyin. "They are all Rohingya here, I feel safe."