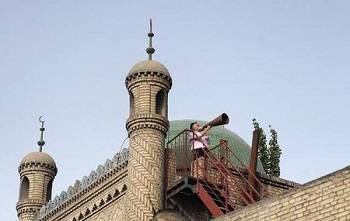 The 22 Imams were given prison terms ranging from five to 16 years at a mass public sentencing in Xinjiang on Monday, the state-run China News Service reported.

Among religious leaders imprisoned were those who continued "religious activities", including preaching, after being sacked from their official posts, it said.

Xinjiang is home to the mostly Muslim minority group known as the Uighurs.

'No rights to faith'

Exiles and activists say Chinese controls on the religion and culture of the Uighur people is more of a cause of violence than armed groups.

The exiled World Uighur Congress condemned the mass sentencing in a statement, saying it was religious repression that trampled the rights of their people.

"The so-called distinction between legal and illegal religion is determined based on China's political needs," said Dilxat Raxit, a spokesman for the group.

"Uighurs basically have no rights to faith."

Mass public sentencings have become common in Xinjiang, with state television often showing them taking place in packed outdoor auditoriums. Rights groups have said mass trials and sentencings deny the accused the right to due process.

A court in September jailed for life the country's most prominent advocate for Uighur rights in a case that provoked an outcry in the West and among rights groups.

An Imam calls on Muslim Uighurs for their afternoon prayer with a home-made iron loudspeaker on the roof of the Kuqa Mosque, the second biggest mosque in Xinjiang Uighur Autonomous Region, August 20, 2012.