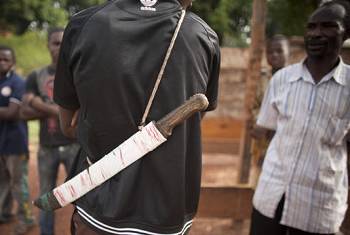 Christian militias in Central African Republic have carried out ethnic cleansing of the Muslim population during the country's ongoing civil war, but there is no proof there was genocidal intent, a United Nations commission of inquiry has said.

"Thousands of people died as a result of the conflict. Human rights violations and abuses were committed by all parties.

The Seleka coalition and the anti-balaka are also responsible for war crimes and crimes against humanity," the inquiry said on Thursday.

"Although the commission cannot conclude that there was genocide, ethnic cleansing of the Muslim population by the anti-balaka constitutes a crime against humanity," the report said.

The final report of the inquiry, which was submitted to the UN Security Council on December 19, said up to 6,000 people had been killed though it "considers that such estimates fail to capture the full magnitude of the killings that occurred".

The UN Security Council established the commission of inquiry in December 2013.

In September 2014, the International Criminal Court opened an investigation into allegations of murder, rape and the recruiting of child soldiers in the Central African Republic.

Some 5,600 African Union peacekeepers, deployed in December 2013, and about 2,000 French troops have struggled to stem the violence in the impoverished landlocked country of 4.6 million people.

The United Nations took over the African Union peacekeeping mission in September and is mandated by the Security Council to double its size to nearly 12,000 troops and police.

The UN commission of inquiry said the deployment of the African Union peacekeepers, French troops and then the UN peacekeeping mission (MINUSCA) had "been primarily responsible for the prevention of an even greater explosion of violence".

Picture released by Caritas International shows an anti-balaka militia member with his machete in Bossembele, Central African Republic on March 5, 2014