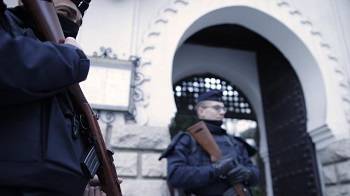 At least 116 Islamophobic attacks on Muslims in France have been reported within two weeks of the Charlie Hebdo killings in Paris, the National Observatory Against Islamophobia said Monday.

According to the France-based observatory’s head Abdallah Zekri, attacks against Muslims in the country increased rapidly following the attack on the satirical magazine in Paris.

In a statement, Zekri said that out of the 116 attacks, 28 were onslaughts on Muslim prayer halls, while French security officials recorded 88 other threats and acts of intimidation against Muslims.

France has one of the largest percentage of Muslims living in Western Europe, around eight million in total.

He called for more effective methods to stop the attacks. “We expected effective measures for the protection of Muslims instead of speeches by the authorities,” he said.

Twelve people were killed when the Kouachi brothers attacked the Paris headquarters of the satirical magazine on Jan. 7. The weekly was known for printing controversial material, including cartoons of Prophet Mohammad (peace be upon him) in 2006 and 2012. The magazine again printed cartoons of Islam’s revered Prophet in the aftermath of the Paris attacks.

Police killed the Kouachi brothers at a warehouse in Dammartin-en-Goele, a small town north of Paris, two days after the attack on the magazine. The same day another gunman, Amedy Coulibaly, was also shot dead, who killed four hostages at a supermarket in Paris.

French police stand guard in front of the entrance of the Paris Grand Mosque, January 14, 2015.