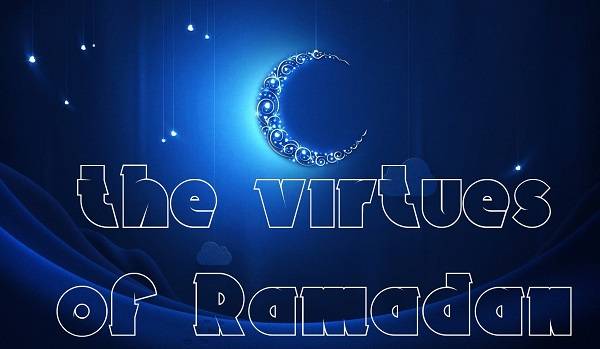 Fasting is one of the great pillars of Islam and it is an indisputably established fact of the religion. This was indicated by the Quran, the Sunnah, and the consensus (of the Muslims). Many narrations were reported about its virtue. There is no doubt that this honorable act of worship has some conditions, pillars, obligations and recommendations that Allah, the Exalted, enjoined. There are also invalidators and forbidden and reprehensible acts in fasting that Allah Almighty prohibited. Fasting has different benefits and many heart-related facts. This is why a Muslim should know these matters to worship his Lord with insight and for this act of worship to be accepted and rewarded with an ample reward.

The virtues of the month of Ramadan include:

Allah Almighty says (what means): {O you who have believed, decreed upon you is fasting as it was decreed upon those before you that you may become righteous.} [Quran 2:183]
The Prophet

Allah Almighty says: "All the deeds of the children of Adam are for him except fasting, which is for Me, and I will give the reward for it." Fasting is a shield (from the Hellfire and from committing sins). If one of you is fasting, he should avoid having sexual relations with his wife and quarreling. If somebody fights or quarrels with him, he should say: "I am fasting." By Him in Whose Hands my soul is, the unpleasant smell coming out from the mouth of a fasting person is better in the sight of Allah than the smell of musk. There are two pleasures for the fasting person; one at the time of breaking his fast and the other at the time when he will meet his Lord. Then, he will be pleased because of his fasting. [Al-Bukhari and Muslim]

said: "Whoever fasts in Ramadan out of sincere faith and hoping to attain the reward of Allah, then all his past sins will be forgiven." [Al-Bukhari and Muslim]

The pillars of fasting:

There are four pillars of fasting; namely:

2- Abstention from whatever invalidates one's fast (such as food, drink, and the like).

3- The time (from the rise of true dawn until sunset).

4- The fasting person (a Muslim who is an adult in full possession of mental faculties and capable of fasting. That is to say, free from being prevented like in the case of the one traveling, the sick person, and women experiencing menstruation and post-partum bleeding).

The benefits of fasting:

1- It instills the inclination to piety, which is one of the greatest secrets of fasting, in the soul.

2- It trains one to be patient and strengthens one's determination.

3- It trains one on self restraint.

4- It humbles the self. Satisfaction with food and drink and having sexual intercourse with women leads the self to insolence, arrogance, and heedlessness.

6- It narrows the channels of the blood, where Satan, the sneaking whisperer, moves within the children of Adam, may Allah exalt his mention. Satan circulates in the human being as blood circulates in the body. Through fasting, the whispers of Satan get quieter, and the power of desire and anger fade away.

1- It trains Muslims on order and unity.

2- It spreads justice and equality among Muslims.

3- It develops mercy in the believers and fosters good behavior.

4- It makes the rich realize the value of the favors that Allah, the Exalted, bestowed upon them, of which He deprived many of the poor, like abundant food, drink, clothes and marriage. By refraining from these pleasures for a certain time and experiencing hardship, one remembers what other people are totally deprived from. This necessarily results in thanking Allah Almighty for the blessing of richness. It also urges him to help his poor brothers and sisters.

5- It preserves society from evils and corruption.

1- It purifies the intestines.

2- It reforms the stomach.

3- It cleanses the body of wastes and deposits.

4- It alleviates the intensity of obesity and the fullness of the stomach with fats.

The forbidden and disliked matters of fasting:

- The forbidden matters of fasting:

These are matters that are forbidden outside Ramadan and whose forbiddance is even stronger due to the honor of the time and the virtue of the month of Ramadan. These include lying, backbiting, tale bearing, obscene speech, watching indecent programs and movies, listening to songs and other matters. The Prophet

said: "Whoever does not give up false speech, acting upon it, and ignorant behavior, Allah has no need of him giving up his food and drink." [Al-Bukhari]

1- Excessively rinsing the mouth and sniffing (water) in the nose.

2- Tasting food without a need.

3- Gathering one's saliva and swallowing it.

5- Kissing for those whose desire is moved by it.

8- Continuing to fast for two days or more without eating in between them.

Acts from the Sunnah in fasting:

It is recommended for the fasting person to do the following acts:

1- Frequently reading the Glorious Quran with humble submission and contemplation.

4- Preventing the tongue and organs of the body from excessive words and acts that include no sins.

5- Hastening the iftaar (i.e. meal with which one breaks the fast).

6- Breaking the fast with an odd number of ripe, fresh dates or small dates. Otherwise, with water.

8- Having suhoor (i.e. predawn meal) and delaying it till directly before the azan of Al-Fajr.

10- Observing iʻtikaaf (i.e. religious seclusion in the masjid) in the last ten days.

11- Performing qiyaam (i.e. night prayers) in the nights of Ramadan, especially in the night of Al-Qadr (i.e. The Night of Decree).

These are six issues:

1- Lowering the gaze and preventing one’s eyesight from freely looking at whatever is dispraised and disliked and whatever engages the heart and distracts from remembering Allah Almighty.

4- Preventing other organs of the body like the hands and the legs from engaging in sins and disliked acts and refraining from eating any suspicious food at iftaar. It is inappropriate for a Muslim to abstain from eating lawful food and then break his fast with unlawful food.

said: "Perhaps a fasting person might obtain nothing from his fast except hunger." [Al-Albani: authentic]

5- One should not eat so much lawful food at the time of iftaar that his stomach gets full. The worst vessel a man can fill is his stomach, filled with lawful food.

6- After breaking his fast, his heart should be wavering between fear and hope as he does not know whether his fast was accepted. Will he be among those who are brought near to Allah Almighty or those who are rejected? Thus, would he be among the disliked? This should be his state after every act of worship.

The school of fasting:

Fasting is among the greatest things that help in combating desires, suppressing lusts, purifying souls, and stopping them at the boundaries set by Allah Almighty. The fasting person prevents his tongue from engaging in idle speech, abuse, defaming people, and spreading harmful backbiting and tale bearing. Fasting prevents the fasting person from cheating, deceit, giving less than due, guile, committing immorality, usury, bribery, and unjustly consuming the money of people through any kind of fraud. It causes a Muslim to hasten to do good deeds, like establishing the prayers and paying zakah in the correct manner and to the recipients specified by the sharia. He should be diligent in offering charity and engaging in beneficial projects. Fasting drives a fasting person to earn his living in a lawful manner and to avoid committing sins and immorality.

Fasting is invalidated if certain matters take place during the daytime in Ramadan:

1- Deliberately eating and drinking.
2- Sexual intercourse.
3- Ejaculation of semen willingly.
4- Cupping.
5- Intentional vomiting.
6- Menstruation and post-partum bleeding.
7- Whatever performs the same functions of eating and drinking like a nutritious injection.

The month of Ramadan has come to you, the month of repentance and forgiveness, the month of doubling the rewards of deeds, and the month when sins are wiped out, so be diligent in acts of obedience and hasten to rewards.

In conclusion, we ask Allah Almighty to accept our fasting, qiyaam (voluntary night prayer), and righteous deeds. He is All-Hearing and Responsive.