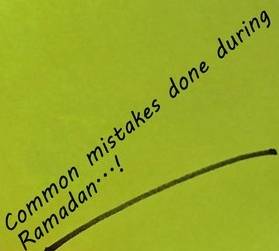 All praise be to Allah and may blessings and peace be upon the Messenger of Allah.

The month of Ramadan is the month of diligence in acts of worship and obedience and drawing closer to Allah Almighty with what pleases Him. That is why the believer should be in his best state therein and show Allah, the Exalted, all that is good, as much as he can. That is why out of mutual advising and cooperation in goodness, we would like to mention some mistakes and innovations that take place in Ramadan, hoping that the fasting people would avoid them in order for their deeds to be free therefrom in Ramadan. These are varied: Some of them are related to beliefs and acts of worship while others are related to words and behavior. They are different in their rulings: some of them are forbidden whereas others are disliked. In his journey in life, and especially during Ramadan, the Muslim should exert efforts to be safe from all these, whether few or many. These include:

- Taking the matter of adopting weak—or rather fabricated—hadiths and spreading them among people under the pretext of urging good deeds in the month of Ramadan lightly. These hadiths are spread among the people, and they are delivered to audiences in lectures and sermons in Ramadan. Conveying and teaching the Sunnah of the Prophet

to people is a virtuous act of worship, whereas attributing a hadith to the Prophet

while he did not say it is a grave mistake for its weakness should be clarified. As for fabricated hadiths, these should not be mentioned except to clarify that they are fabricated. In a collectively, contiguous marfoo‘ hadith, the Prophet

said: "Whoever tells a lie against me (intentionally), then (surely) let him occupy his seat in Hell-fire." [Al-Bukhari and Muslim] That is why we should verify every hadith that is attributed to the Prophet

and taught to people. Is it appropriate for the fasting worshipper to attribute to the Prophet

what he did not say? Those who hold it permissible to act upon weak hadiths in virtuous deeds set certain restrictions that should be observed, so refer back to them. However, these hadiths may never be adopted with regards to rulings and beliefs.

- The mistakes also include: heedlessness to train children to fast since childhood. Training children on obligatory acts of worship was enjoined by the religion, especially prayer and fasting, as explained by scholars. A child should be ordered to pray at the age of seven, and he should be beaten for it at the age of ten, as the Prophet

commanded. Ar-Rubayyi‘ bint Mu‘awwath, may Allah be pleased with her, narrated:

sent a messenger to the villages of the Ansar in the morning of the day of ‘Aashooraa’ (10th of Muharram) to announce: 'Whoever has eaten something should not eat but complete the fast, and whoever is observing the fast should complete it." ... Since then, we used to regularly fast on that day and also make our boys fast. We used to make toys of wool for the boys, and if anyone of them cried for food, then he was given those toys till it was the time of breaking the fast. [Al-Bukhari and Muslim]

This instills the love of fasting in the child and trains him on it by explaining its reward and praising whoever complies with it. It is permissible to gradually apply it, especially in case of long days and hot weather. Some children could fast till noon while others do so till the ‘Asr prayer till, according to their capacity, they gradually complete the whole day.

Unfortunately, most of those from among the disobedient sinners who do not fast in Ramadan and publicly declare this used to eat in Ramadan ever since childhood and they were not trained to fast and were not asked about it; so they found it difficult to fast.

- From among the mistakes: being busy with hastening to eat and drink upon hearing the azan of Al-Maghrib so that one does not repeat (the words of the azan) after the caller to the prayer. The Prophet

said in a marfoo‘ hadith: "When you hear the call (to prayer), repeat what the muezzin says." [Al-Bukhari and Muslim] Thus, the fasting person misses the reward of repeating after the caller to prayer. Many people abandon praying Al-Maghrib in congregation in the masjid in Ramadan under the pretext of having iftaar (breaking the fast). This contradicts the guidance of Prophet Muhammad

. The fasting person should eat and drink what quenches his thirst and hunger, pray in the congregation in the masjid, and then return home to complete his food and drink. Thus, he attains the reward of the congregation, rests his stomach, and gradually deals with it. He should not fill his stomach with food so that he cannot perform qiyaam (voluntary night prayer) prayers at night and diligently worship Allah Almighty therein.

- From among the mistakes in At-Taraaweeh prayer: some of those who perform the prayer hold mus-hafs (copy of the Quran) in which they look to follow what the imam is reciting in the prayer; so the person does not abide by the order of placing his right hand over his left hand in the prayer. Sahl ibn Sa‘d, may Allah be pleased with him, said: "The people were ordered to place the right hand on the left forearm in the prayer." Abu Haazim said: "I knew that the order was from the Prophet

." [Al-Bukhari] They are distracted with holding, putting, and turning the pages of the mus-haf, whereas they should listen to the recitation of the imam and engage in contemplating on and understanding what they hear.

- From among the common mistakes: making At-Taraaweeh prayer short, and quickly reciting the Quran therein; rather, perhaps there might be no tranquility or humble submission, let alone understanding what is being recited. It is also wrong to prolong and exaggerate the qunoot supplication along with observing rhyme and adhering to certain supplications—especially upon concluding the Quran—that were not reported to have been said by the Prophet

and his companions, may Allah be pleased with them.

- From among the common mistakes related to the Night of Qadr (pre-decree): confirming to the laymen that it is a specific night regardless of the differences in opinion about this matter; also, the celebrations, sermons, poems and praises that accompany this, engaging in these matters, neglecting to perform qiyaam and to worship Allah therein, and believing that it has certain signs that were not established by the sharia, like setting the condition of rainfall therein or having dreams and the like.

- From among the common mistakes as well is extravagance in spending on types of food and drink, fruits, different desserts, pickles, and appetizers until spending on these matters in Ramadan becomes so much more than in other months!

- From among the unfortunate matters is that some people take committing major sins lightly, like abandoning paying zakah for many years; abandoning performing the Hajj despite being financially and physically capable to do so; dealing in usury with usurious banks; not regularly performing the obligatory prayers and the Friday prayer; confining performing them to Ramadan; or engaging in backbiting, tale bearing, bribery, cheating, and other forbidden major sins that lead one to lose the rewards of his fasting. Thus, one does not benefit from abstaining from the invalidators of fasting from the azan of the Fajr till the azan of the Maghrib except that he is released from the obligation of fasting and will not be asked to make up for it; however, on the Day of Resurrection, he will be considered to have committed major sins and will deserve entering hellfire because of a pillar that he did not fulfill or a major sin from which he did not repent. If he abandoned this fasting, then a new major sin would be added to his major sins.

- From among the mistakes pertaining to the advent of Ramadan in summer vacations and other vacations: travelling for entertainment and going to places, resorts, parks and beaches where sins are committed; like intermixing between sexes, nakedness and the like, along with abandoning fasting and shortening the prayer under the pretext of the concession for travelers. Jurists clarified that the travelling in which there is concession is that which does not include any disobedience, like obligatory or recommended travelling. However, in the travelling of disobedience, one should not abandon the fasting of Ramadan or shorten prayers because this helps one to commit disobedience.

- It is common in vacations that one stays up all night in cafes, at the waterway, in front of the television, or with friends in useless matters till the time of suhoor (meal taken before fasting), then this is followed by a long sleep during the day and perhaps missing the Fajr prayer in congregation or at its specified time. A marfoo‘ hadith reads: "The Prophet

never found any harm in delaying the ‘Ishaa’ prayer till half the night, and he did not like to sleep before it or to talk after it." [Al-Bukhari and Muslim]

said: "Scholars agreed upon the reprehensibility of chatting after the ‘Ishaa’ prayer except in what is good." [‘Alaama Yas-har Haa’ulaa’ prepared by Khaalid Abu Saalih, page 9]

Staying up late for chatting, doing whatever is useless, entertainment, playing, disobedience, or watching TV series, obscene movies, and what is broadcasted by satellite channels; all this staying up is forbidden whether in Ramadan or outside Ramadan, and it is more forbidden in Ramadan due to the sanctity of the time because as a result of staying up late, there are times at day and at night that are wasted. One might sleep during the day so that he misses performing the obligatory prayers on time because of staying up late at night. Allah made the night for sleeping and the day for working. Those reversed the matter, contradicted what they were ordered to do, and wasted their time through staying up late at night and sleeping during the day. [‘Alaama Yas-har Haa’ulaa’]

Staying up late is forbidden if it leads to something forbidden. Nevertheless, there is no harm in staying up late in obeying Allah Almighty or in serving the interests of the Muslims, unless it results in missing an obligation or a more important interest.

- From among the mistakes of some women in Ramadan: those experiencing menstruation or post-partum bleeding are embarrassed to eat and drink during the day in Ramadan, so they only eat little food or a bit of bread shortly before the azan of Al-Maghrib to confirm that they are not fasting! This is considered extremism, especially for a breastfeeding woman who is experiencing post-partum bleeding and needs healthy nutrition, food, and drink after labor. Women experiencing menstruation and post-partum bleeding may eat during the day in Ramadan, without embarrassment, and it is forbidden for them to fast. It is only forbidden for whoever eats during the day in Ramadan without an excuse to eat and drink due to the sanctity of the month. He then also has to make up and expiate for that day because of breaking the fast without a sharia-approved excuse.

These are some of the mistakes and innovations that are committed in Ramadan. I mentioned them briefly to avoid prolongation. I ask Allah to protect us all from mistakes and shortcomings or from wasting this virtuous month. Amen.