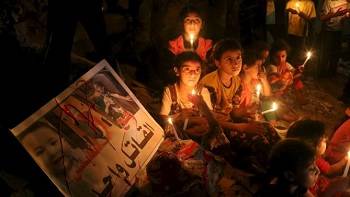 In a report entitled “Operation Protective Edge: A war waged on Gaza's Children”, released on Tuesday, DCI’s Palestine unit said last year’s Israeli offensive had led to the injury of more than 11,000 Palestinians, including 1,000 permanently disabled by the violence.

The children’s rights organization also noted that, a full year after the Israeli assault, thousands of victims -- including a number of children -- continued to suffer from their injuries and the attendant psychological trauma.

The Gaza Strip, with some 1.9 million inhabitants, is known to be the world’s most densely populated area.

On July 7, 2014, Israel launched a major offensive against the coastal territory -- dubbed “Operation Protective Edge” -- which finally ended on August 26.

Over 51 days of fierce bombardment by air, land and sea, more than 2,147 Palestinians were killed, including 578 children, 489 women and 102 elderly persons.

Another 11,000 Palestinians were injured during the onslaught, 3,303 of whom were children, according to a report by the Palestinian Health Ministry.

Palestinian children light candles during a rally to remember 18-month-old Palestinian baby Ali Dawabsheh, who was killed after his family's house was set on fire in a suspected attack by Jewish extremists, in Rafah in the southern Gaza Strip August 2, 2015.