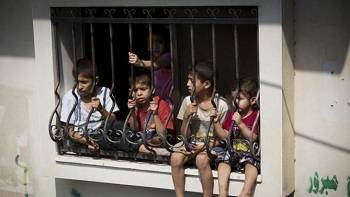 Israeli forces have been using "disproportionate violence" against Palestinian children as they killed at least ten this month during the ongoing unrest that engulfs Israel and the occupied Palestinian territory.

Between October 6 and 12, at least 201 Palestinian children were injured by Israeli soldiers or settlers in the West Bank and Gaza, according to the United Nations Office for the Coordination of Humanitarian Affairs.

"Research by many scholars has shown that depression, anxiety, post-traumatic stress disorder and general psychological difficulties are common among [Palestinian] children," she said.

Triggered last month by Israeli incursions into the Al-Aqsa Mosque compound, protests against Israel's ongoing occupation have given way to a spike in violence in Israel, the West Bank and the Gaza Strip.

Since October 1, Israeli army and police have killed at least 52 Palestinians - among them alleged attackers, unarmed protesters and bystanders - while a series of Palestinian attacks have left eight Israelis dead.

Critics have argued that the children could have been apprehended without the use of lethal force.

"This raises concerns that Israeli forces have apparently adopted a ‘shoot-to-kill’ policy, which in some incidents may amount to extrajudicial killings," DCI-Palestine’s Parker said.
Others were shot dead during protests and clashes between Israeli forces and Palestinians in the West Bank and on the Gaza border.

After 13-year-old Abdel Rahman Abdullah was fatally shot during a demonstration in Bethlehem on October 5, the Israeli military published a statement claiming that the killing was "unintentional" and that soldiers were aiming at a nearby adult.
Impunity stigma

Parker said that international law prohibits "the use of firearms except when strictly unavoidable to protect life. We regularly find that children killed [by Israel] during demonstrations often pose no direct, mortal threat to the life of any police officer or soldier at the time they were killed".

On Tuesday night, a group of Israeli settlers attacked and injured 14-year-old Saqir Herzallah in Yabad, a village in the northern West Bank. As Herzallah was picking olives in his family's orchard, several Israelis from the nearby Mevo Dotan settlement caught and beat the boy, according to local media.

Al-Haq, a Ramallah-based human rights organization, has documented 48 cases of settler violence against Palestinians since October 1, including several instances in which children were attacked.

Palestinian children watch the funeral for Huthaifa Suleiman, 18, in the Bal'a village near the West Bank city of Tulkarem, Monday, Oct. 5, 2015.