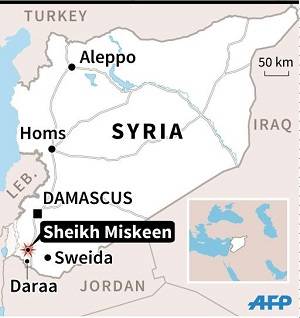 The Syrian Network for Human Rights (SNHR) said in a Monday report that 1,793 people were killed in December.

The group said that this year’s death toll now stands at 21,179 – 75 percent of whom were killed by the Assad regime.

According to the report, Russian forces killed 849 civilians, including 199 children and 109 women since September.

Map of Syria locating fighting between the Syrian regime army and opposition forces in the opposition-held town of Sheikh Miskeen.