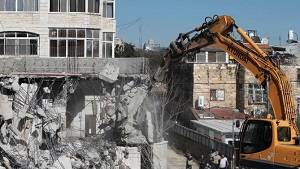 Israel is razing Palestinian homes and other buildings constructed with international aid at an "alarming" rate, the UN says, with more demolitions so far this year than in all of 2015.
In total 121 structures funded partly or fully by international donors were demolished in the occupied West Bank between January 1 and March 2, overtaking the 108 from all of 2015, according to UN figures.

The projects include homes for Palestinians and at least one school, as well as temporary structures such as pens for animals and sheds.

Robert Piper, humanitarian coordinator for the Palestinian territories, said that the demolitions were "alarming".

"We have already surpassed the total number of humanitarian aid items destroyed or confiscated in all of 2015, in just the first 10 weeks of 2016," Piper said.

"We will be protesting to the Israeli authorities of course, as are many in the diplomatic community."

Israel says the projects are built illegally so can be demolished, but aid groups argue that obtaining necessary permits is nearly impossible.

COGAT, the Israeli defense ministry body responsible for implementing government policies in the Palestinian territories, declined to comment on the number of demolitions, saying only that it takes "enforcement steps against any illegal construction" after issuing demolition orders.

Moti Yogev, an MP from the far-right Jewish Home party who heads an Israeli parliament sub-committee on the West Bank, said the rise in demolitions was likely in response to European Union measures on imports of goods from Israeli settlements in the West Bank.

"I have no doubt that the government's firm stance is in part a result of the unilateral measures taken by Europe," said Yogev, whose party has ministers in cabinet.

The UN's Piper said a number of factors may have contributed to the increase in demolitions, including the EU decision, growing domestic pressure on the government amid a wave of ongoing violence and a "renewed push to advance settlement expansion plans in these areas".