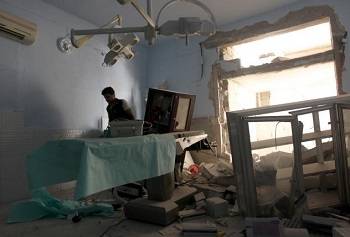 Syrian regime forces launched air strikes against six hospitals in the Aleppo area within a week in attacks that amounted to war crimes, a U.S.-based rights group said on Wednesday.

Physicians for Human Rights (PHR) said it was the worst week for attacks on medical facilities in the Aleppo region since the beginning of the war.

The medical facilities were hit between July 23 and 31, the New York-based group said.

The city and province of Aleppo have been among the areas hardest hit.

"Since June, we've seen increasing reports of attacks on civilians in Aleppo and strikes on the region's remaining medical infrastructure," PHR's director of programs Widney Brown said in a statement.

"Each of these assaults constitutes a war crime," Brown said.

Regime forces and their allies, with Russian backing, have advanced in recent months and imposed a siege on the opposition-held sector of Aleppo since early July, when they closed the main road from opposition areas out of the city.

"The bombings, the lack of humanitarian aid and the failure of the United Nations to deliver any kind of assistance means the death toll may soon be catastrophic," Brown said.

PHR said it has documented more than 370 attacks on 265 medical facilities during the war, and the deaths of 750 medical personnel.

Many hospitals have been hit or damaged during the five-year war. In April, an air strike on a hospital in opposition-held Aleppo killed dozens of people.

A medic inspects the damage inside Anadan Hospital, sponsored by Union of Medical Care and Relief Organizations (UOSSM), after it was hit by an airstrike in the opposition held city of Anadan, northern Aleppo province, Syria July 31, 2016.