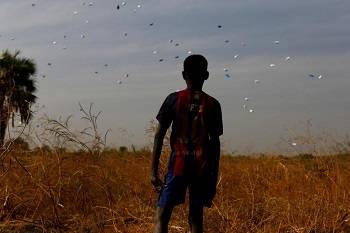 At least 22 million children across four conflict-ridden countries are at risk of death as a result of sickness and famine unless urgent action is taken to address the problem, UNICEF said on Tuesday, urging a 50 percent aid budget boost for those countries.

In a statement, the United Nations Children's Fund said 1.4 million of this figure -- spread across Nigeria’s northeast, Somalia, Sudan and Yemen -- may die of malnutrition this year alone as a result of drought and armed conflict which continue to devastate lives there.

Although significantly downgraded, Nigeria is wracked by an insurgency now its seventh year, with millions of people displaced from their homes, while dozens of thousands have been killed. Somalia, South Sudan, and Yemen are also plagued by armed conflicts that have claimed thousands of lives, with dire consequences especially for women and children.

“Children can’t wait for yet another famine declaration before we take action,” the statement quoted Manuel Fontaine, UNICEF director of emergency programs, as saying. “We learned from Somalia in 2011 that by the time famine was announced, untold numbers of children had already died. That can’t happen again.”

The statement said UNICEF will require close to $255 million to provide the children with food, water, health, education and protection services for just the next few months.

Most of the funds – over $81 million – will go towards nutrition programs to screen children for malnutrition and provide them with therapeutic food, it added.

The agency said an additional $53 million will be allocated to health services, including vaccinations, while over $47 million will go to water, sanitation and hygiene programs to prevent potentially deadly diarrheal diseases.

“The resources needed over the next few months are part of a broader appeal for all of 2017, totaling $712 million – a 50 percent increase over funding requirements in the four countries at the same time last year,” according to the statement.

Armed conflict is a major driver of this crisis, UNICEF said, calling for unconditional, unimpeded and sustainable access to the children in need and an end to the violations of children’s rights in the affected countries.