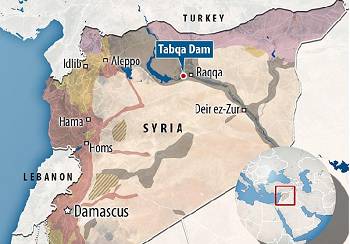 Syria's vital Tabqa Dam, the country's biggest, has become a major part of a Kurdish-Arab assault to cut off ISIL stronghold of Raqa.

Located in Raqa province, the dam is built on the 2,800-kilometre-long (more than 1,700-mile-long) Euphrates River, which flows from Turkey through northern Syria and east into Iraq.

The US-backed Syrian Democratic Forces (SDF) are fighting for the dam and the nearby town of Tabqa before they can advance on IS's de facto Syrian capital, Raqa.

SDF forces and their allies from a US-led coalition were airlifted behind IS lines last week by US helicopters to launch an assault on the dam, around 55 kilometers (35 miles) west of Raqa.

The dam fell into the hands of Syrian rebels in February 2013, before IS seized control of Raqa and its eponymous province in early 2014.

On Tuesday, the situation was relatively calm around the dam, which is still held by IS.

The facility went out of service over the weekend after bomb damage to its power station, risking rising water levels if the situation continues, according to a technical source.

The UN's humanitarian coordination agency OCHA has warned that damage to the dam "could lead to massive scale flooding across Raqa and as far away as Deir Ezzor", a province downstream.

Syrian farmers near the Euphrates say they are terrified IS will blow up the dam to defend Raqa, drowning their tiny villages in the process.

"If this happens, it means most of Raqa and Deir Ezzor will drown, while other towns die of thirst and crops and livestock die," one told AFP.

The Tabqa Dam, also known as the Euphrates Dam, and al-Thawra Dam (Dam of the Revolution), is as important for Syria as the massive Aswan Dam is for Egypt.

Like the latter, it was built with help from the former Soviet Union, a longtime ally of the Syrian regime.

Building began in 1968, and it was inaugurated in July 1973 during the reign of Hafez al-Assad, father of Bashar al-Assad.

Vital for the economy

The Euphrates is the main source of water for agriculture and livestock in the region, and the dam has given Raqa an important role in the Syrian economy.

It was designed to generate 880 megawatts of electricity and provide irrigation for more than 600,000 hectares (1.5 million acres) of land.

But high salt levels in the surrounding land have reduced the amount actually irrigated to less than a third.