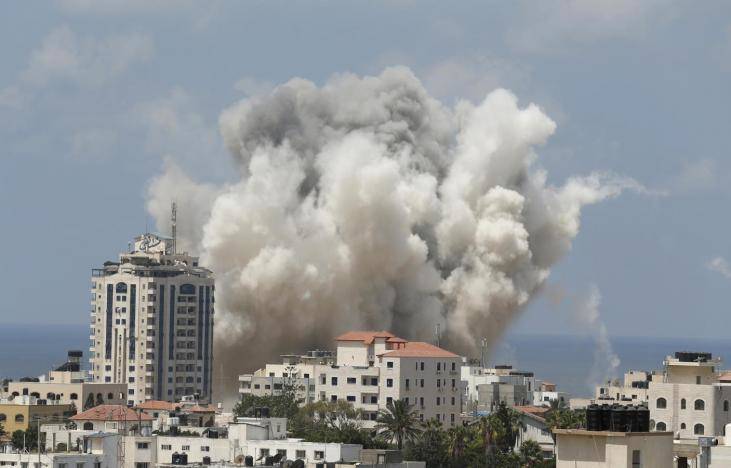 On Friday, a senior member of Hamas's military wing, Mazen Faqha, was assassinated in the Gaza Strip by armed gunmen. It was an assassination tactic not seen in Gaza for at least a decade.

Faqha was a leading member of Hamas' al-Qassam Brigades in the West Bank. In 2003, he was sentenced to life imprisonment in Israel for his role in planning attacks following Israel's assassination of Salah Shehadeh, then al-Qassam's leader.

Faqha was set free in the prisoner-exchange deal that released Gilad Shalit in return for 1,027 Palestinian prisoners in 2011. He was delivered from prison straight to the Gaza Strip, where he resided until his death.

The timing and the tactic of Faqha's killing raise questions about the possibility of another conflagration between Israel and Hamas in the Gaza Strip. Palestinian factions in Gaza agree unanimously that Israel was behind the assassination. Israel had accused Faqha of planning attacks against it from the occupied West Bank while he lived in the coastal enclave. Israel has neither confirmed nor denied involvement.

Hamas recently elected Yahya Sinwar as its leader within the Gaza Strip. Sinwar is a senior military figure within Hamas, and is often described as a hardliner and an ideologue. Having replaced Ismail Haniyeh, Hamas's soft-spoken Gaza-based political leader, analysts began speaking of a shift in power within Hamas.

Faqha's seniority would justify retaliation, and Hamas may respond to maintain its legitimacy among its constituents.

They speculated that Hamas' military wing and its constituency in Gaza was strengthening its influence on the group's decision-making at the expense of the seemingly more pragmatic political wing as well as its external constituency.

Concluding that Sinwar's election has moved Hamas towards a more intransigent military stance is premature. For one thing, the movement-wide elections are still ongoing. Ismail Haniyeh and Musa Abu Marzouk are both competing for the top job to replace Khaled Meshaal. Both these leaders are likely to maintain Meshaal's track record of diplomatic engagement.

Hamas still operates a Shura (consultative) system, which ensures there is room to counterbalance intransigent voices. Moreover, Hamas has been actively promoting speculation that it is on the cusp of issuing an updated charter. This document, allegedly, will commit Hamas to an official recognition of the 1967 borders, while withholding recognition of Israel.

This is not a new development.

Nonetheless, this gesture - and the mere act of revising its charter - can be interpreted as a significant sign that Hamas is shifting direction. Most importantly, however, is that Sinwar himself cannot be dismissed as an intransigent ideologue. For many who know him and have engaged with him directly, he is a calculating strategist and a pragmatic thinker.

He is more likely to be the figure to lead Hamas' military wing towards a calculated strategy for reaching the movement's political goals than to pursue fruitless conflagrations with Israel. Improved relations with Egypt and the prospect of reviving ties with Iran, following Sinwar's election, indicate that under his leadership, Hamas in Gaza does not currently desire any major operations that could undermine this trajectory.

This does not mean that a conflagration might not happen. Faqha's seniority would justify retaliation, and Hamas may respond to maintain its legitimacy among its constituents. Concurrently, the opaque manner in which Faqha was assassinated presents Hamas with some flexibility, in terms of how, when and whether to retaliate.

Given Faqha's origins, an attack might well be forthcoming from the West Bank, rather than the Gaza Strip. Similarly, Hamas might choose to focus instead internally and to wage a war on collaborators with Israel who presumably made this attack possible, and who represent a security breach within Hamas.

Hamas' reluctance to move towards an all-out escalation is not shared by Israel. Whether or not Israel was responsible for Faqha's assassination, the government has been actively threatening the ceasefire that has been holding in the Gaza Strip since 2014.

Measures to ease the blockade on Gaza, agreed upon in that ceasefire discussion, are yet to be fully implemented. While some aspects of the blockade have been eased, the number of Gazans allowed to cross the border into or out of Gaza has, in reality, dropped.

The recently released State Comptroller report investigating Israel's actions in Gaza in 2014 has offered a scathing assessment of the country's conduct in the war. It has outlined an absence of any strategy on Israel's part regarding Gaza, an absence of efforts to prevent a war, and the state's lack of preparedness to address the certainty of Gaza's imminent collapse into a humanitarian catastrophe.

Israel's approach towards Gaza remains a dangerous and reactionary stance rooted in the collective punishment of two million Palestinians. Despite warnings from Israel's military establishment about the need to stabilise Gaza or engage with Hamas, Israeli politicians remain committed to their "mowing the lawn" approach.

Rather than lifting the Israeli blockade, they [Israeli politicians] engage in intermittent warfare to maintain Gaza as an isolated and defeated territory. Reminiscent of the months before the 2014 assault, Israeli war drums have been getting louder. Last month, Israel arrested Rafat Nasif, a senior Hamas member, in the West Bank, ostensibly to pressure the movement to enter prisoner exchange negotiations.

Projectiles from Gaza fired in response to such provocations are described as hostile acts that necessitate Israeli "self-defense". Hamas has assumed no responsibility for projectiles from Gaza and has taken significant steps to limit rocket fire. Nonetheless, over the past few months, Israel has been responding with increased ferocity as well as with more provocations. Avigdor Lieberman, Israel's defense minister, has asserted that another war with Gaza is now a certainty.

While an escalation at this point would not benefit Hamas, the same cannot be said for Israel. Prime Minister Benjamin Netanyahu is facing legal and political challenges at home, most obviously from other reinvigorated right-wing politicians such as Naftali Bennett.
Israel's approach towards Gaza remains a dangerous and reactionary stance rooted in the collective punishment of two million Palestinians [Ibraheem Abu Mustafa/Reuters]

An operation in Gaza would allow Israel's politicians to test the limits of the Trump administration's support for Israeli military operations.

A show of force in the Gaza Strip would assuage some of Netanyahu's critics and deflect from their insistence on pursuing Israeli annexationist policies in the West Bank. These calls for annexation have surged now that a friendly American administration is in office.

An assault on Gaza would allow Israel's politicians to test the limits of the Trump administration's support for Israeli military operations in Gaza as well as in its northern borders. It will also elucidate the impact of Sinwar's recent election on Hamas and effectively force Hamas's military wing to be less strategic and more reactionary.

Israeli military actions would undermine any reorientation within Hamas towards a revised charter or other efforts that might indicate pragmatism, a self-fulfilling policy that enables Israel to continue justifying its blockade on the Gaza Strip.

"Mowing the lawn" is not just a euphemism, and it is clear that Israel is entertaining another round of fighting on the besieged strip. Such a showdown would be catastrophic for the Gaza Strip. Nothing short of lifting the blockade and moving beyond a military prism for dealing with Gaza would end this cycle of violence, which appears to be rearing its ugly head once more.