How the US destroyed Iraq: On Mosul's civilian deaths 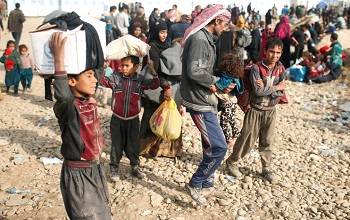 In October 2016, ISIL strategists and commanders were fully aware of the sheer number of Iraqi armed forces that were moving in to encircle Mosul.

The operation to retake Iraq's second-largest city was officially launched last October, and in January its eastern half was declared "fully liberated". Mosul is ISIL's last major urban stronghold in Iraq.

ISIL has known for some time that its control over Mosul was coming to an end. The armed group knew that they could not match the Iraqi army and security forces' superior numbers, equipment and international support.

As the battle unfolded over the coming months, and as ISIL predictably continued to lose territory, many wonder what the armed group was actually fighting for.

A partial answer was delivered on March 17, 2017, when a coalition air strike levelled a residential area in western Mosul, killing as many as 200 civilians in the process. US forces said that they have opened an investigation, while Iraqi commanders responded bluntly that they had called in the strike to eliminate snipers who had taken positions on rooftops.

The US' sanctimonious self-image does not fit well with its own sordid history of involvement in Iraq. The US has become so involved in Iraq's modern history that its footprint can be found everywhere.

Iraqi and American commanders have suggested that the incident was the result of a carefully laid trap. According to that narrative, ISIL had deliberately been concentrating civilians together in particular buildings in the hope that they would be attacked by coalition aircraft. The immediate effect would be a pause in the bombing campaign. The long-term effect, however, was to cause for the conspiracy wheel to continue spinning.

And so it has, with great ferocity. Despite a relatively balanced government response and parliamentary debate, various media outlets have been carrying suggestions that the true death toll was much higher, and that the coalition's strategy from the start was - and had always been - to punish Iraq's Sunnis.

The rumor mill has even claimed that Iraqi and US forces took greater care to avoid civilian casualties in eastern Mosul, where there is a much larger concentration of Kurds, whereas western Mosul's larger population of Sunni Arabs were deliberately targeted.

There have been some calls to compensate relatives of those who died on March 17, 2017, but while the Coalition has not pronounced itself on that particular issue, there can be no compensation for what has happened. The Coalition has stated that its "goal is and has always been zero civilian casualties" and that "ISIS will continue to cause massive human suffering".

But that statement in and of itself barely conceals a massive contradiction, which is, and always has been, at the heart of US policy in Iraq. The US and others have long maintained that ISIL deliberately puts civilians at risk. As early as December 2015, former US President Barack Obama said that ISIL fighters "hide behind civilians, using defenceless men, women and children as human shields".

That being the case, the US had every reason to expect that its decision to destroy entire buildings to eliminate small numbers of snipers would result in massive civilian casualties. The Coalition's carefully constructed strategy was bound to lead to the current outcome.

The US' sanctimonious self-image does not fit well with its own sordid history of involvement in Iraq. The US has become so involved in Iraq's modern history that its footprint can be found everywhere. ISIL may be an outgrowth of radical ideology that was born elsewhere, but it was the United States which supported late Iraqi President Saddam Hussein in the 1980s and which imposed a deadly embargo throughout the 1990s, turning Iraq into fertile ground for those same ideas to grow.

Iraqi security forces have systematically tortured and abused detainees, for which they are rightly condemned. But the United States firmly encouraged the practice in the post-2003 era, by allowing its own forces to torture detainees of its own.

Tellingly, however, in recent years, US officials have simply shrugged when asked to pressure Iraqi officials to engage in prison reform, attributing the problem to cultural values, oblivious to its own role in perpetuating this inhuman practice.

Iraqis will continue to die in Mosul, and those who can, will flee. Where will they go? Thousands are being left to their own devices, carrying whatever they can through the rain and the mud, in the hope that they can find some type of shelter in the wilderness.

A more humane approach to the conflict would have involved a far more robust effort to assist the displaced and the country's liberated areas. And a more intelligent approach to Iraqi and regional security would have translated into serious effort to establish some form of rule of law in the country.

But that was always beyond the US' capacity to imagine and deliver. Successive US administrations have and always will be oblivious to the effect that they have had in Iraq. Neither investigations nor compensation will solve the problem.

In the end, as with the rest of Iraq, western Mosul will be liberated from ISIL and will also recover from decades of war, bombings, occupation and corruption.

The US could make it easier for Iraq and for itself, but will almost certainly choose not to bother itself with the details.

Displaced Iraqis who had fled their homes wait to enter at Hammam al-Alil camp, south of Mosul, Iraq April 3, 2017. REUTERS