Syria gas attack: 'We found bodies all over the floor' 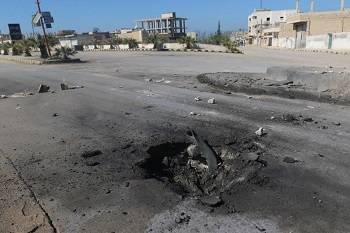 Survivors of a suspected chemical attack in Syria's Idlib province and aid workers on the scene say they are still in shock and struggling to recover from the distressing event of the attack.

"It's just indescribable," Othman al-Khani, local activist and witness said. "We saw people suffocating while their lungs were collapsing. The hardest was watching the children as we stood there unable to provide any sort of assistance, and medics sprayed them with water" to disperse the chemical substance, Khani told Al Jazeera.

Tuesday's air raids on the Khan Sheikhoun neighborhood left at least 70 civilians killed and 557 wounded, according to local medics.

Hani Ahmed al-Qutaini, another witness, described the attack as "a painful experience".

"When the first strike hit at approximately 6:30am, people were asleep in their homes, nobody was aware what kind of attack this was," said Qutaini, who is also a volunteer with the Syrian Civil Defense, otherwise known as the White Helmets.

Qutaini was at home, a few kilometers away from the scene of the attack, when the first bombs hit. "We rushed on to the streets and as we were approaching the scene, we were shocked to see people saying that there was an extremely bad smell that took over the area - everyone who approached the scene got extremely dizzy and fainted," he told Al Jazeera.

According to Qutaini, there were a total of four air strikes on the same area. As he and a team of first-responders approached the scene, he said they realized it was poisonous gas that hit the village. "We were not all equipped. We wore basic masks and don't have access to advanced anti-gas masks," he said. "Some of the medics were affected as a result. A handful fainted and they had to request for backup".

"We found bodies all over the floor. We are simply speechless, there is nothing left to say," Qutaini said.

He added that an ambulance was able to transfer casualties, many of whom were women and children, to 100 emergency points, including hospitals.

"It was a very painful experience. The effect of the gas is instant. It was so strong. There were three or four gas bombs in one area, within 500 meters of each other. Can you imagine?"

Qutaini added. "They were four bombs and many people died on the spot. There was virtually no time for people to react."

According to local medics, the attack caused people to vomit and discharge foam from their mouths.

"I stood 10 meters from the basted area, for about 30 seconds to document the scene with my camera. Upon my return to the clinic some two and a half minutes later, I felt so light-headed and couldn't see," he said.
At the scene of the attack, Diab said he was helping his colleagues take off the victims' contaminated clothes before transferring them inside the emergency clinics.

"We saw cases of suffocation. These were by no means normal cases," he said. "They were poisonous ones. We had to barge into homes to transfer family members who were incapacitated on the floor."

"Ten air strikes demolished the only hospital in Khan Sheikhoun, and nearly destroyed the local civil defense building," he said.

Safwat, a senior health official in Idlib who preferred not to use his full name, told Al Jazeera that there are currently 557 wounded civilians. Among them are 23 children and 16 women.

He said he expects the total death toll to rise. "Vulnerable victims suffered the most. Children suffered the most. Among the dead, most were children," he said, adding that 53 Syrians had been transferred to hospitals in Turkey for further treatment.

Safwat explained that the symptoms were common across all of the cases. Muscle spasm, difficulty in breathing and suffocation, are what caused most of the deaths, according to him.
Khan Sheikhoun's sole hospital was attacked and destroyed three hours after the first airstrike hit.

"Two days prior to this attack, Idlib's main hospital in the south of the province was also attacked. We're massively short-staffed with very little supplies," he said. "We need mobile oxygen masks, the one supply that is the most vital for the victims' survival".

Out of Idlib's 20 hospitals, Safwat said there are nine that can currently receive these cases. Many of the hospitals have been forced to share scarce supplies.

"People in surrounding areas across Idlib are just so scared. They're scared to be the next victims of a chemical attack," he said. "We had seen such cases in the media and on television, but in reality, we had never experienced this before."

Syrian opposition groups and activists blamed the attack on the government of Bashar al-Assad. But the Syrian military rejected the accusation, saying it "denies using any toxic or chemical agents in Khan Sheikhoun today, and it did not and never will use it anywhere".

Khani, however, believes the attack was intended to target civilians.

"They claim to have been targeting a military base, but this was just a civilian neighborhood," he said. "The scene is even more gruesome than can ever be described. Everybody was panicking, especially those who had to watch their own children die in pain."

A crater is seen at the site of an airstrike, after what rescue workers described as a suspected gas attack in the town of Khan Sheikhoun in rebel-held Idlib, Syria April 4, 2017. REUTERS/