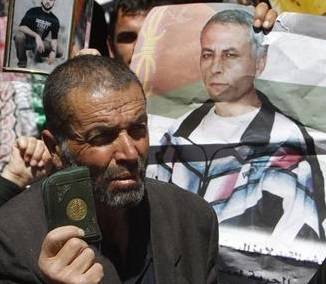 In a photograph widely shared on social media this month, Kifah Quzmar, a final-year business student at Birzeit University near Ramallah, wears a red-and-white keffiyeh and a somewhat defiant look.

The difference between the 28-year-old and tens of other Palestinian students and youth arrested in recent weeks is perhaps that his story made it out to the rest of the world.

More than 70 international organizations and student groups around the world signed a statement asking for his release, after Kifah began a four-day hunger strike to protest spending 19 days under interrogation without access to a lawyer, and the continued extension of his detention without charge.

On April 6, Kifah was ordered to serve six months in administrative detention, without indictment or trial. He had been arrested a month earlier while crossing the Allenby Bridge, known by Palestinians as the Karameh border crossing, on his way back from Jordan.

"We were waiting for Kifah to arrive and when he didn't, we almost sensed he was arrested," his brother, Ismat Quzmar, told Al Jazeera. It took four days for the family to determine his whereabouts as Kifah was moved from al-Moscobiyeh, also known as the Russian Compound - a detention centre in Jerusalem used for the purpose of interrogation - to another facility, and then back.

When Kifah's lawyer, Anan Odeh, was finally able to locate him, the family learned that Kifah had been banned from having his lawyer visit.

"In my experience as an ex-prisoner, when they arrest you, the first thing they do is they ask you to sign a piece of paper that lists your rights and your obligations. The paper says you have the right to see your lawyer, you have the right to take a bath, to eat, and so on," Ismat, who was imprisoned for a year in 2012 on what he said were charges related to his university activism, told Al Jazeera.

"But the first article in the obligations says that the interrogator has the right to deny you any of your rights if he thinks it's necessary for interrogation," he added.

"They use this technique to fully isolate the prisoner in the interrogation phase," Ismat said. "So they can play their game, the game that is to say: Listen, you are here alone, there is no one who can help you except for us, so you have to cooperate with us if you want to get out of there."

According to Israeli military law, which applies to Palestinians in the occupied West Bank, a prisoner can be held without indictment for 90 days, which can be extended to another 90. Most commonly, interrogation lasts for 20 to 30 days, according to Aouda Zbidat, a lawyer for prisoners' rights group Addameer.

In comparison, Israeli civil law allows detainees to be held without charge for 30 days. And while Palestinians in the military court system can be denied access to a lawyer for 90 days, under Israeli civil law, the ban can last a maximum of 21.

"In the Israeli system, they would request it only in more exceptional cases. Here, it is quite the norm," Zbidat said. "You'd usually strike a balance between the detainee's rights and the interest of the investigation. In the military court [system], the interest of the interrogation normally wins."

In the cells, the light is always on and the bathroom is a hole in the ground, right next to where you sleep - on the floor, on a very thin mattress, with no pillow. Being in this cell will take a toll on you.

Zbidat said that most detainees go through some form of psychological torture while under interrogation.

"The average detainee would usually be shouted at, threatened in different ways," she told Al Jazeera, adding that interrogations can sometimes last many hours.

"In the cells, the light is always on and the bathroom is a hole in the ground, right next to where you sleep - on the floor, on a very thin mattress, with no pillow," she added. "Being in this cell will take a toll on you. The walls are usually rough, there's no chair or anything to sit on, and if you want to relax and lean on the wall, you can't."

Ismat noted that you have to "put on the intelligence guy's hat", adding that each prisoner is dealt with "as an information bank".

"So, they don't deal with you only about the [specific] case. They will start from day one: who are your parents, where were you born, who were your friends in school. The interrogation technique is based on the idea that they have to break the soul of the prisoner so they get everything from him. You need to destroy his self, to defeat him as a human being. So, they turn you into a talking machine, to whom you ask questions, and it gives answers," Ismat said.

A practice dating back to the British Mandate, under military law, the decision to order a prisoner to administrative detention is issued by the military commander based on a secret file. Neither the lawyer nor the detainee are allowed to know the content of this file.

According to Birzeit University's Right to Education campaign coordinator, Sundos Hammad, the past two to three months have seen an escalation in student arrests. Last January, Israeli forces raided the Birzeit campus, confiscated computers from the student council and "seized material, including propaganda belonging to Hamas", according to a statement released by an army spokesperson at the time.

Eighty Birzeit University students are currently detained, the vast majority by Israel. This includes 10 under interrogation and 15 in administrative detention.

"For us, the reason for the detention is arbitrary from the beginning," Zbidat said, "because they are being arrested for political activities, in breach of their right to free expression."

But Israel is not the only authority cracking down on Palestinian students' freedom of speech and expression. Last year, Kifah Quzmar was arrested by the Palestinian Authority for a Facebook post in which he called the PA security services "rotten". He was accused of insulting a public official, a crime that carries a six-month sentence.

The case of Basil al-Araj , who was killed in an Israeli raid last March after being arrested by the PA last year, has triggered mounting criticism of the PA's security coordination with Israel among Palestinians.

"When Kifah was arrested, the PA arrested his friend," Ismat Quzmar said. "Rather than a feeling of community and solidarity, that we as Palestinians are facing the occupation, now we have a Palestinian side cooperating with the occupation. This is a huge diversion from our norm as a Palestinian people."