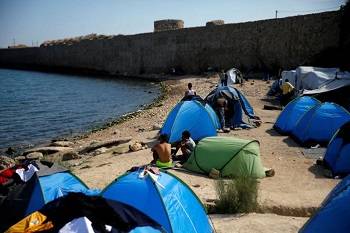 "43,204 migrants and refugees entered Europe by sea in 2017 through 23 April, over 80 percent arriving in Italy and the rest in Spain and Greece," the UN migration agency, the International Organization for Migration (IOM), said in a statement.

The IOM also noted the deaths and disappearances of 23 refugees over the weekend off the island of Lesbos in waters between Greece and Turkey.

"These deaths nearly tripled the number -- from 14 to 37 -- of men, women, and children known to have died this year on the Eastern Mediterranean route. That figure is barely 10 percent of the total recorded at this time last year, when 376 migrants or refugees were known to have died trying to enter Greece by sea from Turkey," it said.

According to the IOM, refugee arrivals for the Greek islands were also much higher last year -- more than 154,000 through April 23, compared to just 4,843 this year.

"So far this year, 36,851 migrants or refugees entered Italy by sea, a nearly 45 percent increase over the total number of arrivals coming to Italy by the Central Mediterranean route last year at this time," it said.