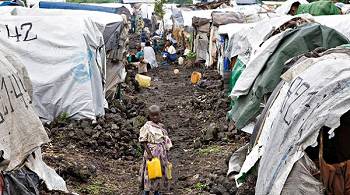 Militia attacks in Democratic Republic of Congo have left hundreds of thousands in desperate need of humanitarian aid, according to local officials and the United Nations.

Some 731,000 people in the country’s Kasai region, mostly women and children, have been displaced by militiamen who attack police and civilians alike, said Lt. Lawrence Ndosi, a Kasai security officer.

''Kamunia Nsapu militia attack police and the army in the Kasai region. When the security organizations repulse them, they turn to attacking villages and killing innocents,” he said.

He said the displaced people were forced to flee with only what they could carry, and now are in neighboring areas with no food, shelter, or medicine.

Militiamen went on rampage in the area after their leader, named Kamuina Nsapu, was killed by police last August. Since February they have stepped up attacks, and last month killed over 40 policemen in a single ambush.

''One million people have been displaced by the violence that has affected this region, while 731,000 people, including thousands of women and children, need humanitarian assistance,” said Mamadou Diallo, the UN humanitarian coordinator in the country.

Apart from those displaced within the DRC, over 11,000 Congolese have reportedly fled to Angola, to the south.

Jean Ndulu, a displaced local now living with relatives in the distant Ituri province, said, ''I fled from my home after militiamen attacked our village. A good number of my fellow villagers were killed.''

Over 40 mass graves were recently discovered in Kasai region by the UN.

Displaced people in Democratic Republic of the Congo