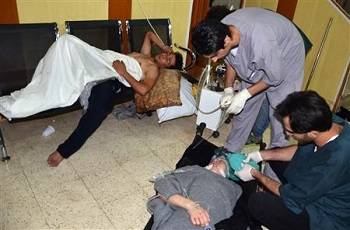 Syrian regime forces have used deadly nerve gas in four chemical weapons attacks since December, including one in Khan Sheikhoun that killed nearly 100 people in April, according to Human Rights Watch (HRW).

Citing new evidence, the US-based rights group said the attacks are "part of a clear pattern" that could amount to crimes against humanity.

Bashar al-Assad's forces are also stepping up chlorine gas attacks and have begun using surface-fired rockets filled with chlorine in fighting near Damascus, HRW said in a report published on Monday.

"The government's use of nerve agents is a deadly escalation," Kenneth Roth, HRW's executive director, said.

"In the last six months, the regime has used warplanes, helicopters, and ground forces to deliver chlorine and sarin in Damascus, Hama, Idlib and Aleppo," he added.

"That's widespread and systematic use of chemical weapons."

Assad has denied using chemical weapons, saying the suspected sarin attack in Khan Sheikhoun was a "fabrication" to justify a US missile strike.

HRW urged the United Nations Security Council to adopt sanctions against anyone UN investigators find to be responsible for these attacks.

Al Jazeera's UN correspondent, Rosiland Jordan, said diplomats had called the report "a real confirmation of what they know to be happening inside Syria".

In April, Russia blocked a UN resolution demanding a speedy investigation into the Khan Sheikhoun attack.

HRW said it interviewed 60 witnesses and collected photos and videos providing information on the four suspected chemical attacks for its report, entitled "Death by Chemicals".

In some of the attacks, the aim appears to have been to inflict "severe suffering" on the civilian population.

In Khan Sheikhoun, residents said the first bomb believed to be carrying the deadly agent sarin was dropped near the town's central bakery. It was followed by three or four high-explosive bombs a few minutes later.

Dozens of photos and videos provided by residents of a crater from the first bomb showed a green-colored metal fragment that HRW said was probably the Soviet-produced KhAB-250 bomb.

The report cast doubt over Syrian and Russian claims that toxic agents were released in Khan Sheikhoun after a bomb struck a chemical weapons depot on the ground.

"It would not be plausible that conventional bombs struck chemical caches repeatedly across the country," it said.

On December 11 and 12, some 64 people died from exposure to nerve agents after fighter jets attacked in eastern Hama.

A third suspected nerve agent attack in northern Hama on March 30 caused no deaths but wounded dozens of civilians and combatants, according to residents and medical personnel, the report said.

The Organization for the Prohibition of Chemical Weapons (OPCW) is investigating allegations of chemical weapons use in Syria along with the joint UN-OPCW panel (JIM) which is tasked with assigning responsibility for the attacks.

People, affected by what activists say is nerve gas, are treated at a hospital in the Duma neighborhood of Damascus August 21, 2013. REUTERS