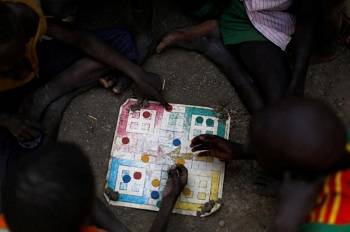 The civil war in South Sudan has forced more than two million children to flee their homes, according to two UN agencies.

Children make up 62 percent of the more than 1.8 million South Sudanese refugees who have arrived mainly in Uganda, Kenya, Ethiopia and Sudan, say the UN children's fund, UNICEF, and the refugee agency, UNHCR.

More than a million children have, meanwhile, been internally displaced.

"That refugee children are becoming the defining face of this emergency is incredibly troubling."

South Sudan has been riven by a civil conflict since a split between President Salva Kiir and his former deputy, Riek Machar, escalated in December 2013.

Tens of thousands have been killed and 3.5 million displaced.

About 100,000 people are facing a famine and a million are on the brink of famine.

The UN announcements came on the same day that a monitoring group warned a third South Sudanese county is at risk of famine.

Famine already has been declared in the counties of Leer and Mayendit, with a million people said to be at risk.

The new report says famine is likely to spread during the lean season for farmers from July to September. It says that without humanitarian aid, famine could be declared in even more areas.

The African nation's civil war, now in its fourth year, has blocked aid to some regions.

The combination of fighting and famine in the world's youngest country has created one of the world's largest humanitarian crises.

Last month, the US condemned Kiir for the state's "man-made" famine and ongoing conflict, urging him to fulfil a month-old pledge of a unilateral truce by ordering his troops back to their barracks.

"We must see a sign that progress is possible," Nikki Haley, US ambassador to the UN, told a Security Council briefing on South Sudan on Tuesday.

"We must see that ceasefire implemented."