Palestinian hunger strikers: 'They had no choice' 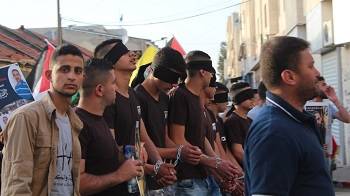 On a sweltering spring afternoon, relatives and supporters of the Palestinian hunger-striking prisoners gathered at a marquee in downtown Ramallah.
The tent, one of dozens erected in solidarity with the prisoners across towns and villages in the occupied West Bank and the Gaza Strip, stretched across one end of Clock Square, its blue tarpaulin walls crammed with the prisoners' images.

Perched on a plastic chair, Mahmoud Ziadeh, 61, held a photograph of his son Majd, one of the 1,500 Palestinian prisoners who declared a hunger strike on April 17. Since then, Mahmoud has come here each day for eight or nine hours, displaying the photograph and talking with other affected families.

"The tent has become an address for solidarity with the prisoners on strike," he said. "Men, women, labourers, unions, ministers, municipalities and the youth - all the parts of the Palestinian community come here. Any activities, demonstrations or marches, all of them start from the tent."

On this afternoon, with no major activities planned, the tent was filled with conversation. Families swapped stories about their imprisoned relatives and shared anxieties over their conditions.

"I already knew some of the families here," said Naema Ziadeh, Majd's aunt. "We listen to each other's stories, and we share our feelings about having our family members in prison. We are all experiencing the same feelings. Day after day, the mood is getting worse. Psychologically it is really painful. But on the other hand, I feel proud about what he's doing."

Majd was arrested in 2002 at the age of 18. Along with all the men living in his apartment building, including his father, Mahmoud, Majd was woken up in the middle of the night, handcuffed and ordered outside. The men were then marched through the streets of Ramallah in front of an Israeli military tank, before being taken to an Israeli settlement.

While his father, a former prisoner himself, was released, Majd was transferred to Ofer prison and eventually charged with being a member of the Fatah-aligned Tanzim faction and participating in attacks on Israeli soldiers, settlers and a military base. No one was killed in the attacks, but Majd was convicted at a military court and sentenced to 30 years in prison. The other men convicted of involvement received significantly lighter sentences, Mahmoud said.

"In the court, the judge said they would give him a harsh sentence because of the things he said in court," Mahmoud recalled. "He told the court, 'I'm against the occupation. I will continue to hate the occupation, but there is a big difference for me between the Jewish people and the occupation … I do not recognize the court. Any sentence that you give me will be a badge of honor.'"

When Majd appealed against his sentence, the judges cited the courtroom statement as a reason to deny the appeal.

But this past March, 15 years after his arrest, Majd's sentence was reduced by a third after his lawyer, Labib Habib, successfully argued that there were serious flaws in the judicial process that led to a disproportionate sentence. Habib found that the charge sheet used by the military court judges to reject an appeal in 2005 did not reflect the charges for which Majd had been convicted.

When news of the reduction reached the family in late March, it was a bittersweet. There was anger that the errors had been allowed to stand for so long and disappointment that he had not been released right away, but also relief that Majd's sentence had been cut.

"It was a shock," said Raya Ziadeh, 32, Majd's sister. "It was shocking for us to realise that after 15 years, the Israeli prosecutors made a fatal mistake and he was sentenced for 30 years. When we knew this, at the beginning, we were very optimistic that he would be released immediately, to be honest."

For Mahmoud, the reduction provided some comfort and hope that he would see his son outside prison.

For the past 15 years, the family has seen Majd only on the other side of a double glass window, and spoken to him only via the telephones in Israeli prison visiting halls. Visitation permits have been given sporadically, while requests have often been denied for arbitrary reasons, family members told Al Jazeera. When they are able to visit him in prison, their time together is strictly limited to 45 minutes.

"Usually, if I get the chance to visit every six months or so, there are just very basic questions to ask Majd, like 'How are you doing? What's new in your life?'" Raya told Al Jazeera. "He wants to know small details that we don't have the chance to know about each other. Even like the way he looks or the way I look, he would look at me to see if my hair had got longer.

"It's not easy," she added. "Whenever you feel that the conversation has just started, it finishes. It's not enough time to connect on a deeper level."

Before the hunger strike was called, Majd had shared a cell at Hadarim prison with Marwan Barghouti, the prominent Fatah member and leader of the strike. Barghouti, who is serving five life sentences for his role in attacks during the second Intifada, had been acting as Majd's academic supervisor as he studied for a BA in political science.

The programme had been interrupted in the past when the prisoners were moved to other jails, and it was halted abruptly on April 17 when the hunger strike began. Majd was transferred into solitary confinement at Ramle prison, where conditions are far worse than at Hadarim, Mahmoud noted.

"Now, they don't give him a break to leave his room, to go outside and walk under the sun," he said. "They don't have soap to wash their hands or take showers. The prisoners are searched every day. The wardens raid their rooms and search everything in the room. They force them to take off their clothes, except their underwear."

The family's lawyer also reported that Majd was suffering physically as a result of the hunger strike; his reactions and senses have dulled and he has lost 17 kilograms, Mahmoud told Al Jazeera.

The same situation applies to the families outside. We aren't fully awake or asleep at any time, because we are deeply concerned about their situation."

When Majd was arrested in 2002, he was in his final year of high school. Mahmoud described him as a dynamic and active child, who loved sports and joined the local basketball club in Ramallah. An older brother to two sisters, he learned to take on extra responsibility from a young age after his father was arrested and held under administrative detention in relation to his political activities with the Palestinian trade union movement.

"He's a very strong person," Raya said. "He always tried to be supportive to his mother and me and his younger sister. We did almost everything together when we were younger. We went to the same school, we would play together; we spent the whole day together."

His absence from family life is particularly tough on holidays and at important family events. He was not able to attend his sister's graduation or wedding. When his mother passed away from an illness, he was not allowed to attend the funeral.

"We do miss his presence every day," Raya said. "But his presence is really missed in these moments when the family unites to celebrate or to mourn, and he's not there."
Mahmoud last visited Majd in prison two weeks before the hunger strike began, and his son informed him that he would be taking part. He had been suffering from an ear infection that required surgery, something that had worried his father, but he was determined to go ahead with the planned strike.

"When they decided to go on hunger strike, they had no choice," Mahmoud said. "They are fighting for their humanity and their dignity. I don't have any choice except to support him. I wished him and everyone success for the fight."