How Israel is targeting Palestinian institutions 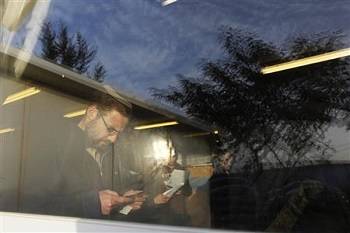 When Israeli police showed up at the maps and survey department of the Arab Studies Society's office in Jerusalem last month, director Khalil Tufakji was surprised to receive a six-month shutdown order.

Police proceeded to confiscate computers and the main server, along with posters and maps that had hung on the walls. Tufakji, along with the equipment, was swiftly transferred to the Jerusalem-based Moscobiyeh interrogation centre, also known as the Russian Compound.

The Israeli order alleged that Tufakji's office was working for the Palestinian Authority (PA), and police later accused the office of investigating land sales to Israelis on behalf of the PA.
But four hours after his arrest, Tufakji was released and his equipment returned, untouched. The department was reopened a couple of days later. Today, inside Tufakji's modest office, a mark on the wall where an aerial photograph used to hang was the only sign a raid had taken place.

"I have no idea why they took it," Tufakji said of the photograph, which showed settlement development in occupied East Jerusalem. "I got it from the Israeli side. None of this is secret. We collect and analyze information; this is what we do here."

The maps and survey department was established by the late Palestinian politician Faisal Husseini as part of the Arab Studies Society in 1983. Its goal is to monitor settlement expansion and land use and to produce detailed maps of the occupied Palestinian territories. The office has also mapped pre-1948 Palestinian property in West Jerusalem and produced studies of Israel's policies.

After it was initially closed in 1996 by Israeli authorities amid a tense political climate, the department moved from another location in occupied East Jerusalem to Orient House, then the seat of the Palestine Liberation Organization (PLO). Orient House was itself shut down in 2001 at the outset of the second Intifada. Dozens of Palestinian institutions, including the Jerusalem Chamber of Commerce, would meet the same fate in subsequent years, according to the Civic Coalition for Palestinian Rights in Jerusalem.

Since 2001, the maps and survey department has continued its work from the occupied West Bank as part of the Arab Studies Society, an NGO whose funders include the United Nations Development Programme and whose projects have been sponsored by the European Union.

After the recent raid, Israeli police said they had received information that "the Palestinian Authority had activated an office in Jerusalem", which was allegedly in constant contact with the security services in Ramallah to pass on names of those involved in land sales to Israelis.

Under Palestinian law, selling land to Israelis is considered high treason and is punishable by death; however, any death sentence would have to be approved by Palestinian President Mahmoud Abbas, and he has never done so.

Tufakji told Al Jazeera that the closure order, issued by the Ministry of Public Security, did not mention specific activities, but instead justified the closure on the grounds that the office did not have a proper license to operate in Israel. But the office, located a few hundred meters from Israel's separation wall, is administratively in the occupied West Bank.

"Maybe someone signed the order without knowing exactly where my office is," said Tufakji, an expert on settlements and borders who was also part of the Palestinian negotiation team at the 1991 Madrid conference.

Tufakji said the interrogation, which lasted 30 minutes, revolved around his ties to the PA, but as soon as the officers realized he was operating from the West Bank, the questioning stopped.

A police spokesperson declined to comment on the incident, and the Ministry of Public Security did not respond to Al Jazeera's request for comment.

The bizarre incident is not an isolated one. According to the Civic Coalition for Palestinian Rights in Jerusalem, more than 30 Palestinian institutions and organizations have been shut down in the city since the 2001 closure of Orient House. Six-month closure orders have been continuously renewed ever since, in defiance of recommendations made in the 2003 Road Map drawn up by the Middle East Quartet as part of the Israeli-Palestinian peace process.

"Targeting NGOs is targeting the presence of Palestinians in East Jerusalem. NGOs are the main body providing services, because according to Oslo [the interim accords signed by Israel and the Palestinians in 1993 and 1995], the Palestinian Authority is not allowed to be in Jerusalem," Zakaria Odeh, executive director of the Civic Coalition for Palestinian Rights in Jerusalem, told Al Jazeera. "All policies, including house demolitions and residency revocations, have the goal to alter the demographic structure of Jerusalem as a whole."

The closure of Palestinian institutions in the city has been condemned by the European Union for creating a dangerous leadership vacuum, and by Palestinian rights groups as a violation of international law and an attempt to stifle Palestinian political, cultural and social life in occupied East Jerusalem.

Israel does not allow the PA to carry out any political activities in the city, and a number of organizations and events have been shut down on this basis. The Palestinian National Theatre, Hakawati, has often seen its events disrupted.

In 2009, when Jerusalem was nominated as the Arab Capital of Culture, Israeli police shut down events organized for an international literature festival on the grounds that they constituted PA political activities. More recently, last December, the theatre was prevented from holding a singing event on the basis that its organizers were affiliated with the Popular Front for the Liberation of Palestine, a left-wing Palestinian political party that Israel deems a "terrorist" group.

Since the closure of Orient House, Palestinians have lost access to 14,000 books, periodicals, documents, personal archives and maps collected by the Arab Studies Society.

"Between 1991 [and] 2000, we coordinated our information with the American, the British and the French," Tufakji said. "Every week, we held a tour around a settlement; we went in and took pictures about how the settlement developed. We kept a detailed database of each settlement, including future master plans and photographs. I had collected original maps from the Library of Congress [in the US], from Turkey," he added.

"When they closed Orient House, they confiscated all our documentation and equipment. Until now, they are held by Israel."

Jewish settlers are seen through a window of a temporary structure, serving as a synagogue, as they pray for Migron in the unauthorized Jewish outpost of Migron near the West Bank city of Ramallah February 8, 2012. REUTERS