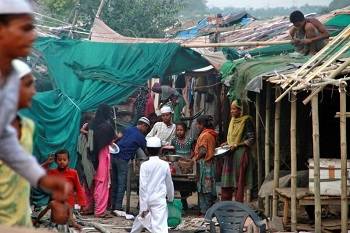 Nearly a half-million Rohingya from Myanmar have been displaced due to decades of oppression in southwestern Myanmar, according to a new UN report.

The report, published by the UN High Commissioner for Refugees (UNHRC) to mark June 20 World Refugee Day, says by the end of 2016 the number of Rohingya refugees rose to 490,300, up from 451,800 the previous year.

The report shows that Bangladesh hosts the largest number of Rohingya, 276,200, with 243,000 of them living in a refugee-like situation.

However, the government of Bangladesh estimates the population to be between 300,000 and 500,000, the UNHRC says.

The Rohingya minority is one of the most oppressed communities in the world, as they have been suffering from a state-run slow-motion cleansing operation in the southwestern Myanmar’s state of Rakhine, according to Human Rights Watch.

Rohingya migrants gather near a cycle rickshaw to collect food being distributed before the iftar meal in a refugee camp in Shram Vihar, New Delhi